The Beast of Britannia. 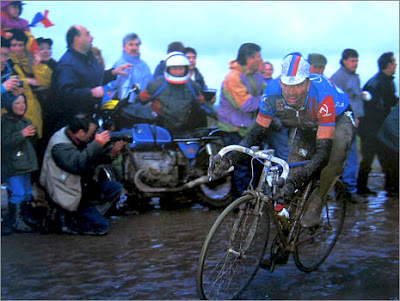 
Finishing Roule Britannia by William Fotheringham about the exploits of the Brit Pack during the early cycling years. Engaging reading and I'm enjoying Fotheringham's writing; detailed, well researched and entertaining.

Certain guys stick out from this pack and one notable rider is Sean Yates, nicknamed; the beast. He was part of the foreign legion of the eighties including; Graham Jones, Robert Millar, Stephen Roche & Aussie Phil Anderson. A big impact rider with a tendency for his fearlessness on the bike. The opposite was true of him, he was quiet and let his actions speak for him. Even the young Lance Armstrong was scared of him when they were together with Motorola in the early nineties. He was well respected for towing his teammates in time trails due to his colossal speed. Teammates would guesstimate how much pain he would cause them. Yet, his wins were infrequent but he won the Tour's fastest ITT (in 1988) before aerodynamic bars. He used his size to downhill advantage often stringing the peloton behind him tearing down a mountainside at 60 mph usually without a helmet. He also made his bike suffer wearing out a chain a week. And he loved Paris-Roubaix, his best placing fifth, in 1994. A typical Yates race, splendidly muddy and fit for adventure. He calls it, 'A man's race.'

Fotheringham paints a broad picture of British cycling's achievements in the Tour and does so... with a big heroic brush. A fine read!
book Paris-Roubaix Review sprinters Vintage Tour de France