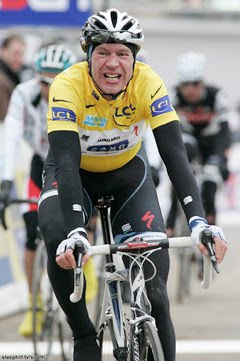 Yellow for one day...
good for the wunderking!
www.cyclingnews.com
Thirty-eight year old wunderkind, Jens Voigt seems to be riding so well in Paris-Nice that the age thing is not an hinderance. He's riding well and spent a day in yellow only to lose it to an opportunity driven Alberto Contador after stage 3.

Voigt is a fan favorite for his gusto riding, always maintaining a hard tempo at or near the front. He always seems to have a little extra in him when racing. I like his style. As an older rider I'm inspired by his recent outpouring on the pedals. The German finished well placed but out of reach of the twenty year old new wunderkind, Peter Sagan. The young Slovak took charge sprinting to his second win (stage 5) leaving the favorites in the dust. Jens Voigt lies quietly sixth overall.
I remember that horrid fall on stage 16 at last years Tour where Voigt had to exit resulting two months off. Like everyone else I thought it was the end. But, thankfully he's back with all the gusto and enthusiasm as ever. And it's refreshing. As much as the young Peter Sagan is turning out to be the race revelation, the older Jens Voigt is doing very well!
Inspiration Jens Voigt Paris-Nice

Groover said…
I like you wordplay with Wunderkind and Wunderking. Voigt is probably not only liked for his on-the-bike style but also for his "off-the-bike" attitude. Love his interviews and some of his quotes such as "Shut up legs" are just plain genius.

By the way: I love the Pyrenee's Cycling Cap. Will write about it shortly. Just waiting for the right hook. Don't wanna give it just the boring old plug. It deserves much more. :-)
March 13, 2010 at 4:52 PM

Richard said…
He's the type of person you would want to have a beer with. Imagine the conversation!

racejunkie said…
Great site, love your artwork--plus best of all, you're a Jens fan! Definitely added to my blog list and my regular must-reads.