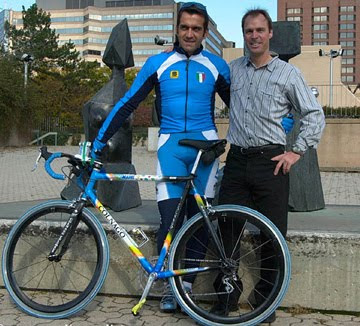 Old school...
Franco Ballerini & Steve Bauer, 2002 Hamilton.
That's a videocamera taped on the handlebars.
One more day before the pavé classic and thinking of two former heroes of Paris-Roubaix. This image is from 2002 in Hamilton a year before the World's Road Race Championship.  Franco Ballerini was the Italian director and out on his Colnago videotaping the course. Steve Bauer had a company that was the official tour operator of Hamilton's 2003 World's. A nice portrait of two tough riders that knew and loved the great race. Ballerini won twice (1995 & 1998). Bauer came ever so close to beating Eddy Planckert in a photo finish in 1990!

Tomorrow's race will include the Pavé Franco Ballerini to honor the highest place Italian rider. Now that Ballan is out could it be time for Manuel Quinziato to shine on the cobbles? 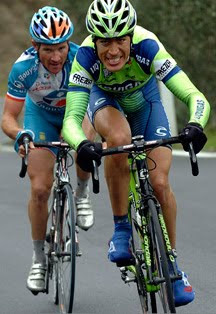 Quinziato could follow in the footsteps
of Ballerini!
Paris-Roubaix Steve Bauer The Classics The Monuments