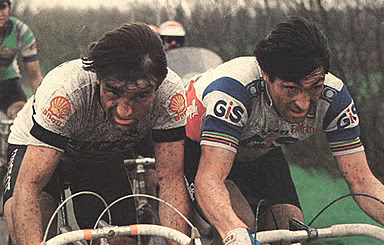 Gilbert Duclos-Lassalle (2nd) & Francesco Moser (3rd)
battled all the way to the finish line.
Here's a most interesting and enjoyable look at the 1983 Paris-Roubaix outside of the limelight heroics of Dutch  winner Hennie Kuiper.  I enjoy the  behind the scenes account of the also rans or the last riders' bringing up the rear. The unsung heroes without hope just wanting to accomplish their team goals and just trying to finish. The footage is wonderful following a 'noname' rider on his exploits through his own Hell only to end up in relative obscurity in the broomwagon. Well known riders such as diminutive Swiss star, Beat Breu contends with leaving the race in his own team car and remarking, "Difficult!" 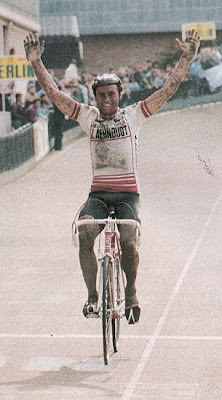