What's in the fridge: Going Postal! 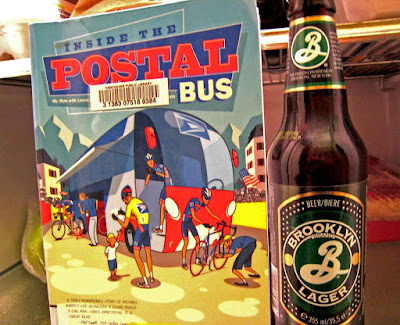 Riding the Postal Bus with a Brooklyn Lager!
American lager with a nice bite.
Image by the author.

Last week I finished Michael Barry's, "Inside the Postal Bus." And I thought it was very informative book bringing the reader in & behind the scenes on the bus of the 2004 U.S. Postal Cycling Team's final season. I definitely was intrigued how Barry fit in with the high profile team. He worked for Armstrong and seemed even back then to be a loyal domestique.

Sure, Lance and company is all there from George Hincapie and what I found strange the now depose fallen star, Floyd Landis. Showing a less dramatic side relaxing kicking back from racing classics, Tours and just plain racing mayhem. Barry let's us in just enough to show that it's an all boys club but an exclusive one in the bus except when Sheryl Crow comes a knockin' singing her songs to entertain the troops. She even goes out for training rides with them. I'm sure a photo op is here, but were not privy to that. But, Hollywood stars know a good PR event with entertainment from Arnold Schwarzenegger & Robin Williams visiting Lance and the boys.

Interestingly there's plenty of detailed cycling capturing the Spring classics thru the torrid heat of Spain. It's a long season. And, it seems that the expresso machine works just as hard  as the unfaltering hero to the riders. That's where the book goes well too. The back areas are not visited by the public. He shows the staff with as much diversity as the riders being the silent stars to a cycling team. Providing the needed support before, during and after a race. Without these valued domestiques, like Barry, a team wouldn't survive.