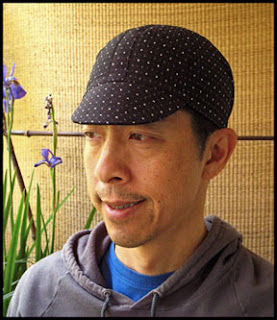 I'm enjoying the process of choosing fabric for our cycling caps. Next to helping Carolle create them it's fun searching for it. When we walk into a fabric shop and spot something interesting we both have a pretty good idea that it's right on. I'm excited to introduce Galstudio's newest creation, the Nite Rider Cycling Cap.

That's 'Nite' as in night and for good reason... 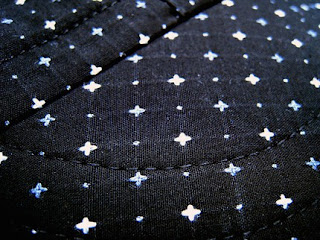 Close up detail of the Nite Rider.

At the start of the 1914 Tour de France, a group of 147 sleepy riders lined up in the Paris suburb of Saint-Cloud. Among those brave adventurer's was Belgium Philippe Thys,  the 1913 winner. The consummate  professional, trained as well as diet obsessively towards his goal in July. A work ethic that was bordering superhuman. Reportedly, he would often awake before dawn an ride for hours in the dark. And following that include a long hike. For the riders, a formidable distance to Le Harve awaited them, an enormous distance of 388 kms. Unheard of in our  day, the stage started at 3 am.

Thys won that Tour and again for the third time in 1920 becoming the first ever to win three in a row. A remarkable achievement if not for the intervening war years prevented him from winning even more victories. 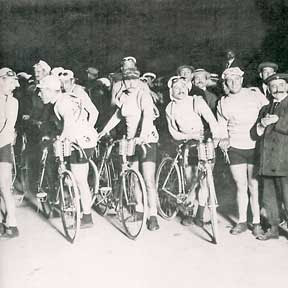 It's 3 am...
No rest for the wicked
before the start of stage one, 1914 Tour.
cycling cap Design fun Galstudio Gear and Equipment Review Vintage Tour de France