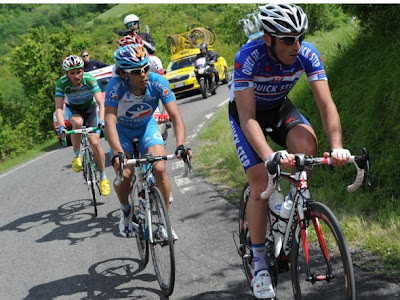 The break that will last...
(right to left): Pineau, Arashiro, Fouchard, and Voss.

A beautiful spectacle called the breakaway occurred today on stage 5 from Novara to Novi Ligure. With 25 km into the stage four riders' did just that. Lead by Yukiya Arashiro, Jerome Pineau, Julien Fouchard and Paul Voss. Domestiques working hard.

I'm reminded best of writer Samuel Abt and his definition of a breakaway, "A breakaway is when one rider or a group just bolt off the front of the pack and attack and get away out of site. They're riding for victory. It's inspirational. Sometimes a rider who shouldn't win a stage wins a stage or a race simply because they attack and took the initiative. They didn't sit back. They acted. It's wonderful. That's what we all hope we do in life.  On any given day we hope to have this resounding victory and be in the record books and be remembered. And go back to it and say maybe on a lot of other days it's humdrum, mundane, & earning your daily bread. But that day, I just got away from everybody and did it... and I won!"

That's what this group did. They tore off away from the peloton with a dream and kept it going with a late attack by the Japanese Arashiro with a kilometer left. Pineau won the sprint and was the breakaway hero earning his win from Fouchard with the brave Arashiro in third. With the pack a frustratingly 4 seconds behind. A breakaway that worked!
Giro d'Italia Inspiration

Tour De Couch said…
I will look back fondly and say I remember stage 5 of the giro of 2010 when pineau, arashiro and fouchard felt the peleton's breath at 1km to go but they dug in and brought it home. So good to see in modern day cycling on flatt-ish stage
May 13, 2010 at 11:31 PM