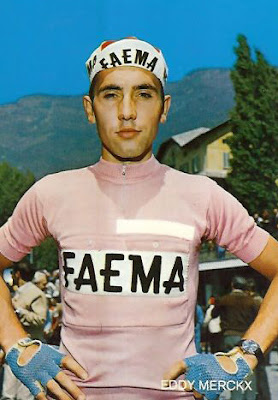 Nineteen sixty-eight was an important year for Eddy Merckx signing for the Italian Faema team. He entered into a new environment that taught him new methods about care, preparation and feeding. Racking up many road success such as World Champion (1967) at only 22 was a sign to everyone of his increasing importance especially to the Italian Faema team. 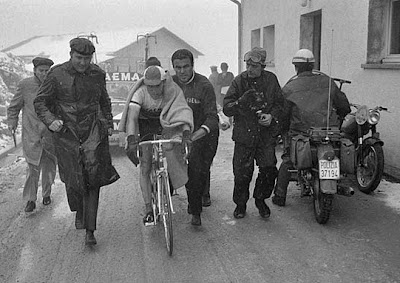 The polished diamond winning Tre Cime Lavaredo.
Merckx said, "I had remained a rough diamond who was now being polished by Italian hands. The new approach clearly reaped it's rewards. My racing weight went down to 72 kilograms (158 pounds). My climbing in particular was to benefit as result. I won the Tours of Sardinia, Catalonia, Romandie and Italy comfortably. That final victory in the Giro was especially important because I won it almost effortlessly. I seemed to be flying. The crowning glory was, of course, that memorable stage over the Lavaredo where I made mincemeat out of everyone for 30 kilometers. In 1967, I had fully blossomed as a one-day racer, while in 1968 it became clear that I had a great future as a major stage racer." 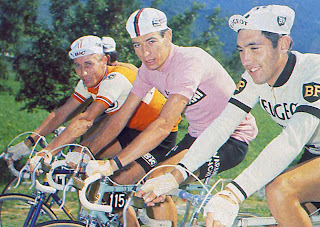 Unknown said…
Hi Richard -- I've really enjoyed reading your blog because of the way it spends as much time on cycling's history as its present. There's a series of videos on Youtube that I think you might appreciate -- a three-part countdown of the top 30 cyclists of all time, set to classic rock. Some guy in Spain put it together and it's really a masterful job. The music choices are often inspired, and the footage he's dug up is awesome. At points the order of his rankings is debatable, but in general it may be the best half-hour you've ever wasted.

I'm glad you're enjoying the blog. I just watched the video and it's very cool. I've never seen moving images of Magni holding that tube for his broken clavicle. Love the stuff on Gaul, Bahamontes & Anquetil! Cheers!
May 28, 2010 at 12:30 PM

Unknown said…
I particularly enjoyed the choice of "I Fought the Law" for Rominger (the joke, presumably, being that Indurain was the Law) - although it probably would have been better for a more prominent second-banana like Poulidor or Joop Z.
May 28, 2010 at 2:52 PM