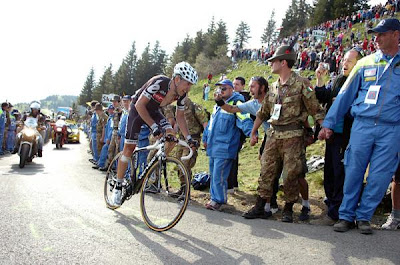 Sastre flying up the Zoncolan.

Carlos Sastre climbed up to fourth overall after the exciting and leg breaking 15th stage up to the dreaded Monte Zoncolan. Sixth place 2'44" behind the winner Ivan Basso, Sastre rode up one of the steepest climbs in all of Europe, an average gradient of 12%. I marveled at the almost superhuman abilities of the riders as they fought the long & sheer climb (10.5kms). Without doubt, Ivan the terrible did the Tifosi proud sustaining a high tempo to shake off a pesky Cadel Evans to win the stage in lone splendor.

Sastre, who was third in last year's Giro, won two mountainous stages soloing up the Monte Petrano and Mount Vesuvius. That's where the little Spaniard shines where the slopes rise. And Tuesday will test the riders once again with the Plan de Corones TT, 12.9km long but all so steep. Starting with a 3.7% grade moving to a whooping 24% up to the 2,273 meter, 7,457 ft summit. Think that's brutal? I think Sastre will let his climbing legs do the talking during the last week of this hilly Giro. The names evoke fear; Aprica, Passo del Mortirolo, Passo di Gavia and Passo del Tonale. He's entering into his domain. 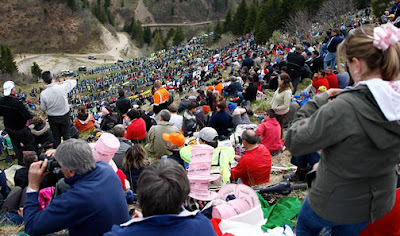 Really like your job! And what an exciting Giro.
Just being a smartass: that is a pic of Stelvio, not part of this year's Giro.

While I endeavor for accuracy I sometimes don't get it right. I stand corrected!

Michael said…
As I watched the climb up the Zoncolan, the camera panned to that mountainside showing the massive crowd waiting at the top, it was almost as amazing as watching Basso ride Evans off his wheel. It has been a great Giro.
May 24, 2010 at 12:28 PM

Richard said…
I'm still breathless after watching them climb along with the great crowds!
May 24, 2010 at 12:52 PM

Jim said…
I couldn't believe how smooth and calm Basso was. And then in contrast, how much Cadel Evans seemed to be fighting his bike, as if he couldn't stay on top of the gear anymore. It was, to use a cliche, epic.
May 24, 2010 at 2:17 PM

Unknown said…
God what an awful climb! I think I lost about five kilos just from the anxiety induced by watching it.
May 26, 2010 at 9:13 PM