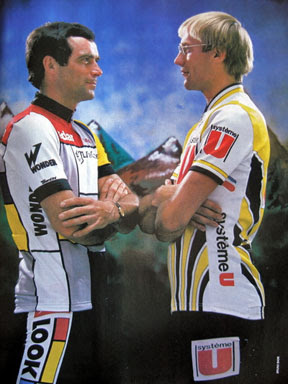 An unresolve rematch...
Two French heroes ready to duke it out at the 1986 Tour.
Two riders that never got the chance to have a return grudge match since 1984 was the Badger & the Professor.

Their first battle was decisive for the younger Laurent Fignon, as he proved the stronger and with a better team beat Bernard Hinault with five stages and the overall in 1984.

Due to a knee injury, Fignon was out of the 1985 Tour and further injuries forced him out on stage 12 in 1986. A strong badger was hard to beat as he toyed with teammate and rival Greg LeMond supporting and continuingly attacking him. Too bad Fignon wasn't healthy enough to challenge Hinault. Not many could!
Bernard Hinault Laurent Fignon Vintage Tour de France

Unknown said…
Perhaps an even greater shame is the fact that we never got to see Hinault, Lemond, and Fignon compete against each other on separate teams in their prime . . . . perhaps a parallel-universe 1985, with Fignon uninjured and Lemond on Peugeot. Now that would have been something!
December 8, 2010 at 4:06 PM

Richard said…
A Heathy Fignon & LeMond with Peugeot? Riding with the likes of Millar, Simon, Duclos LaSalle... It would be a good team, what a battle royale that would've been!
December 8, 2010 at 6:05 PM