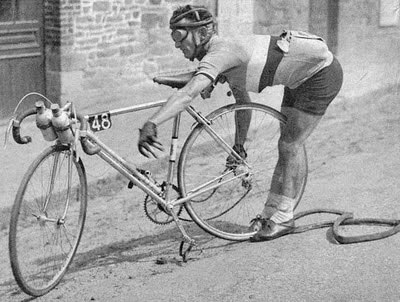 Some days it just works...
Jean Robic after replacing his rear tyre, 1948 TdF.

This morning I ventured out for a nice 2 hour ride and as I approached the UBC hill, a rider was on the side fixing a flat. As I passed him, he yelled if I had a pump. Of course, I always have mine stuffed in the back of my jersey. I stopped and handed him my mini pump happy to help another cyclist. Only, he tried and tried the pump and it didn't work. He said he tried his CO2 inflator but it wasn't working so a hand pump was the next solution. Two other cyclists rode by and he ask them as well. They only had CO2 inflators.

Well, I was surprised having the pump with me all this time and thinking it would help me in a state of need. The rider was just as surprise and he said it was a good thing to find out now rather than later. I can't remember the last time I used it. As I bid him good luck he was just reaching for his cell. Now, I think it's a good idea to go over all equipment before a spin. Especially to see if my pump is in working order!
Gear and Equipment Vintage Tour de France