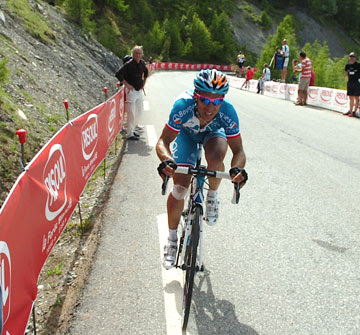 French fans had a reason to scream for joy as former national champion, Nicolas Vogondy won the Dauphiné's first mountain stage to Risoul. A spectacular attack by the Frenchman with 2 kms from the finish line left the favorites staring at each other. A moment of hesitation was all Vogondy needed to strike like a lightning bolt.

And this popular Bbox rider smiled like a cheshire cat soloing to the finish line. Why? His career almost ended in December when doctors found he had cardiac arrhythmia. He was tested for possible risk of a heart attack and the doctors and the French cycling federation had to stop him from riding. Two months later, happily relieved, he was allowed to race again.

Vogondy is 32 years old, 14 years as a Professional and in a way resurrected his career that looked on the verge of ending. Now, with his great comeback win he looks forward to the Tour beating his health problems becoming a French hero! 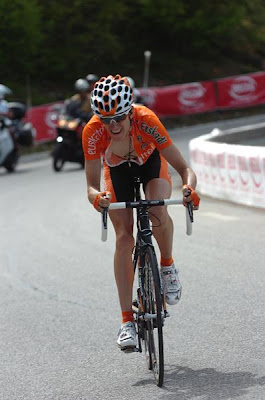 Unknown said…
As great as Vogondy's victory was, I was especially happy to see Sicard at the front of the action yesterday. His wins last year at the U23 Worlds and the Tour de L'Avenir were impressive, and with any luck he'll be able to build on them. I realize that doing well in the espoirs division is seldom an indication of future greatness -- but, hey, there are always exceptions. (Also, with his glasses and helmet off he kind of looks like Louison Bobet.)
June 11, 2010 at 1:16 PM

Richard said…
The young Sicard has plenty of talent and he does have a Bobetish look to him! Look out for this rider in future races!
June 11, 2010 at 3:15 PM