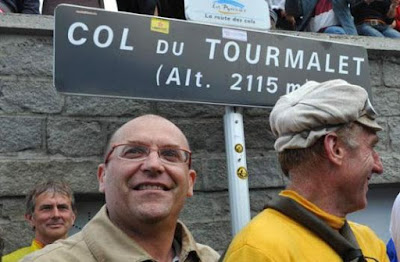 Last month at the Tour...
Laurent Fignon with Sean Kelly.

Laurent Fignon succumbed to cancer at the age of 50. A sombre reflection as I awoke this morning I looked outside and saw the rain falling. He was one of those riders of my generation that I followed with a certain respect & awe.

In the 1983 Tour, in his second season, he took over the yellow jersey on Alpe d'Huez. Fellow Frenchman, Pascal Simon dismounted & abandoned due to a dislocated shoulder and lost his yellow jersey to a waiting Fignon. The Professor climbed well but never won a mountains stage but was always in the front. But, on the final TT in Dijon he showed his class as Fignon won in style. He became the youngest post war Tour winner, at 22. A strong second in the 1984 Giro was a lead up to the bigger prize. He fired off five Tour stage wins and fought off Bernard Hinault for his second Tour victory.

But, his 1989 season was  pivotal. Winning the 1989 Giro he looked a favorite for the Tour only to lose it by the infamous 8 seconds from Greg LeMond. He went on to win the Tour of the Netherlands & was the world's top-ranked cyclist in 1989. He won 76 victories in his career. Skillful as a cyclist he retired in 1993 with a final victory in the Ruta Mexico.

I heard in 2006, he opened a hotel complex in the Pyrenees, Laurent Fignon Centre, offering guided tours up the Col du Tourmalet. And recently, while receiving cancer treatment he was a special commentator for France Television.

A sad day, the great man will be missed! 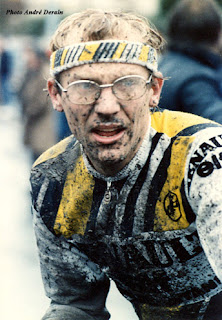 Unknown said…
Nice photo of Fignon and Kelly . . . According to his autobiography, they were good buds back in his racing days.
August 31, 2010 at 1:36 PM

Richard said…
I was listening to Sean Kelly on Eurosport, today. And obviously, he was subdued over Fignon's death.
August 31, 2010 at 2:50 PM

Tim said…
My introduction of European cycling came from a 1983 edition of the Fabulous World of Cycling and I was intrigued by this team mate of LeMond that won the Tour that year. Since then Fignon had always been a favorite. In my dorm room at college the first few years I had a huge poster from Gitane on my wall of Fignon “the Legend Continues” it read. Sure wish I still had that poster. I also wanted a Renault headband but never got one.

I was probably the only person disappointed at a race early on that Sunday morning when word got phoned in from the VeloNews people that LeMond had won the ’89 Tour. I was on the start line and just bowed my head. Today I bow my head in even greater disappointment.
August 31, 2010 at 2:56 PM