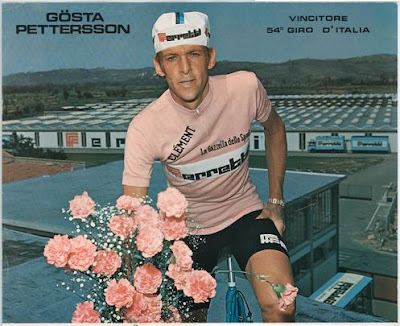 Love is this beautiful Ferretti blue from the Italian team's 1970 De Rosa replica team bike. This is the color I'll try to match for my upcoming Marinoni restoration.

Ferretti ('69-'73) was a Italian kitchen equipment manufacturer just like it's famous brother's Salvarani and SCIC that also fielded successful cycling teams in the 60s & 70s. The stars of the team were the Swedish famous four for winning three successive team time trial world championship titles; the Pettersson brothers. Erik, Gosta, Sture and Tomas were signed in 1970. Gosta stepped into his familiar dominating style by shocking the experienced pros by winning the final time trial in the Tour de Romandie, moving him from fourth to first. In the Giro, he finished in sixth, nine minutes behind the winner Eddy Merckx. Then came the Tour, and he carried his strong form to finish in third overall behind Zoetemelk and the winner Merckx.

In 1971 he was second in Paris-Nice behind Merckx. And, next was the main target for the team, the Giro  now looking favorable because Merckx wasn't riding. The high mountains was challenging enough as Pettersson found out. His team was inexperienced and he was mostly left alone in the high mountains. He won the leaders jersey from stage 18 onwards to the finish in the Vigorello velodrome in Milan on June 10th 1971. Gosta Pettersson became a professional at the late age of 29 years old but became Sweden's first and only Grand Tour victor! 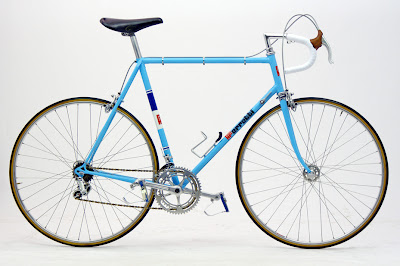 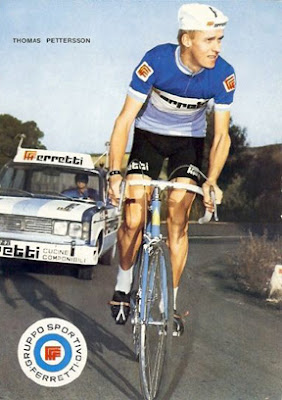 Wille said…
Many (or most) of the Petterson brothers Ferretti bikes where made by Masi.

Many of them where painted in the color scheme of their Swedish sponsor Monark. Monark uses a darker blue than Ferretti and has got a triangular emblem, all shown on Thomas bike.

Yes it's a bit strange that they where allowed to ride for Ferretti on Monark painted bikes.
June 13, 2013 at 8:50 AM