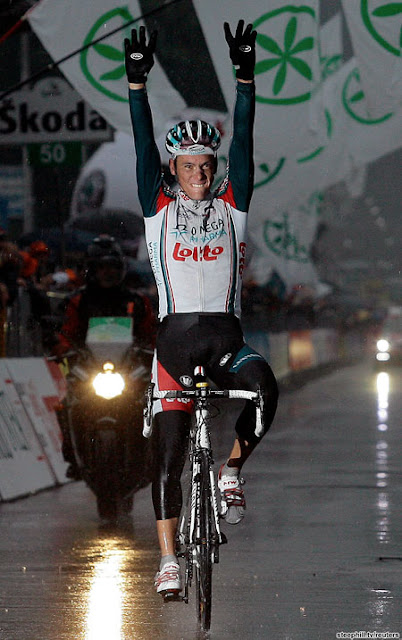 Philippe Gilbert starring in...
Classic Gold, from the school of hard knocks!
Worthy of a second look...
Philippe Gilbert has to be one the toughest classic riders. His ride in the Giro di Lombardia is nothing less than scintillating. After winning the semi-classic at the Tour of Piedmont he blasted through the storm of Lombardia to win his second edition.
This one look the hardest as just 34 riders out of 195 starters finished. Gilbert has a very good classic palmares; Lombardia (2009, 2010), Tour of Piedmont (2009, 2010), Paris-Tours (2008, 2009), Omloop Het Nieuwsblad (2006, 2008) & Amstel Gold Race (2010). Only a few missing.
After his wet Lombardia victory Gilbert said, "It was a very difficult race. It was cold and there was water everywhere after all the rain. I just kept believing. I'm used to conditions worse than this."
Perhaps, his competitors are thankful that the season is over. They won't have to see him win ...until next year!
The Classics The Monuments