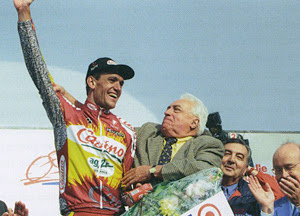 The return of the French after 42 years...
1998 Paris-Tours winner Jacky Durand embraced by
the elated 1956 winner Albert Bouvert.

The great Autumn classic Paris-Tours is on this Sunday. It was first held in 1896, sound familiar? Paris-Roubaix also debuted in the same year. Perhaps, not the same hellish fury as Roubaix, Paris-Tours is virtually flat and yet made for the 'Flahutes'. 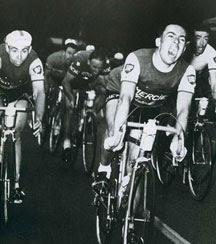 Flahute style...
Bouvert lunges to the line to win the 1956 edition,
little did he know he was the last Frenchman to win until 1998!
This image & above from: The Spring Classics.
Flahutes are the tough hewn riders attracted to the worst roads and weather (pavé, rain & snow) of the northern classic races. French journalists nicknamed their Flemish neighbours Flahutes, riders raised in the hardship of industrial northern Europe after the Second World War. Think of the old time Flahutes; Brik Schotte (winner 1946-47), Paul Maye (1941-42, 45) and some of the recent ones; Erik Zabel (1994, 2003, 05) & Johan Museeuw (1993).
In the early years, Paris-Tours ended in a Velodrome like Roubaix. Times have changed and the 252 km long race ends on the famous Avenue de Grammont, the long (2.7 km) run into Tours. Known as the Sprinters' Classic it has offered lone dramatic finishes like the breakaway by Richard Virenque, who in 2001, cruised alone for victory. And, the French riders are the second most decorated behind the Belgians. At one point it took 42 long years between victories. Frenchman, Albert Bouvet won in a sprint to win in 1956 as "the last French winner of Paris-Tours" ...for 42 years. Jacky Durand, in 1998, finally put an end to French cycling's longest drought in a classic. Bouvet was so overjoyed he hugged Durand on the podium.
Belgian Flahute, Philippe Gilbert will be back to defend his last two victories in the event. But, is he rested from the World's in Australia? Even if it's not his day then the French Flahutes are itching to win with the likes of Romain Feillu or Jimmy Caspar.

It promises to be a classic race... bring on the Flahutes! 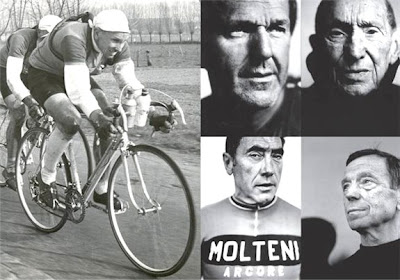