Above is an excellent tribute video to the 70s/80s Dutch rider, Johan Van de Velde. He won many victories for the famous Ti-Raleigh team; the Maillot Blanc in the 1980 Tour, two Tour stage wins, Dauphine Libere, & twice Dutch National Champion. 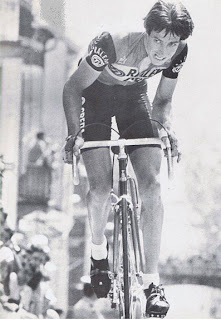 Tour 1981...
Ti-Raleigh glory days.
But, his star shone racing for Italian teams. In 1984, he signed for Metauromobili-Pinarello and became for the first time in his career, team leader. Van der Velde said, "For many years I thought I would like to ride in an Italian team. I like the country, the mentality inside Italian teams suited me, and they always had good bikes and equipment. The Italian people can be temperamental, but I like that too. It was a small team but there were some good riders in it, including Lucien Van Impe and a Dutch friend of mine, Frits Pirard."

The following year, Van der Velde won his first Giro points title. He said, "When I got the points jersey I felt the really warmth of the fans for the first time. They cheer for everyone but especially for the jerseys, and there is a lot of interest in whoever is wearing them." But, he missed the Tour and moved to Panasonic under his old coach Peter Post wanting to relive his Ti-Raleigh days. He even won a stage and wore the Maillot Jaune but it wasn't the same. Van der Velde went back to Italy riding for the Gis team and duly won the 1986 & 1987 Giro points title. 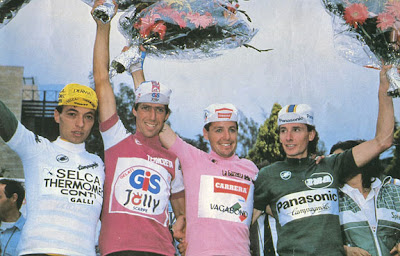 Van der Velde (Gis-Jolly) wins the 1987 Giro points title...
flanked by Conti, Roche & Millar.
And, the tifosi love their heroes, who ride with panache like Van der Velde. In the famous stage on the frigid Gavia pass in 1988, heroes were created. Amongst them, Johan Van der Velde marched up the summit alone. Bare arms and staggering upwards was an amazing feat in blizzard conditions. It was epic!

Johan Van der Velde said, "It was hard but I got to the top in the lead and I was OK. I just have to go downhill all the way to Bormio and I have won a big stage. But once I got over the top, I have never known cold like it. I went down about two or three kilometres and I could not brake properly and it was difficult to see through the snow. So I stopped by my team car and drank some hot tea and some cognac. No matter how much hot tea I drank I could not stop shaking. When the bus came I got in it. There were other riders in there, and we went down by the bus with our bikes and got out three kilometers from the finish and rode over the line. Later the organisers said about 60 riders had come down the mountain in cars, vans and buses, and they could not disqualify all of them. So I did start the next day. It was an exceptional day, they said." 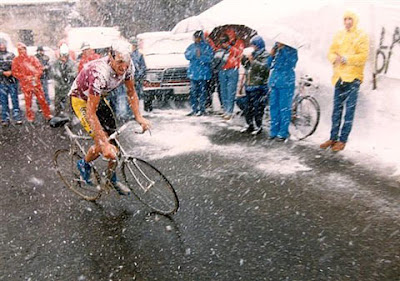