The Wrath of the Nuovo Record 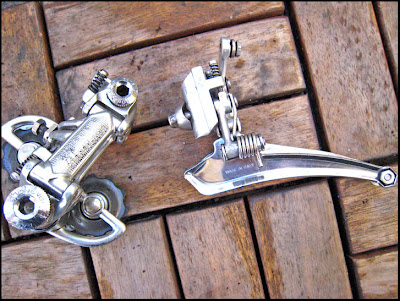 I contacted Damian at Peninsula Cycles to add another graphic to my frame. And, we're confirming the order before it goes for painting/decaling. That should be very soon.

Now, that I'm off the bike I have time cleaning and polishing my Nuovo Record Group. The derailleurs are amazing. Built tough and close to bomb proof. Except for a minor scuff it's in excellent shape. Not bad for it's 23 years. It hasn't aged at all. Only the jockey pulleys show some wear, that's all. Superior construction from the Vicenza manufacturer.

The Nuovo Record derailleur was first introduced in 1966 it soon became synonymous with precision & reliability.

Eddy Merckx knew and rode it to his first Tour de France win in 1969. I don't know what helped spurred him on to ride that wicked Tour. Earlier, at the Giro, he was tested positive for amphetamines and expelled. He denied it. Afterwards, he was cleared on the grounds that the test procedure had been flawed. He lost 18 days without competition and worked up plenty of aggression and attacked his first Tour. Merckx won three time trials and three more stages arriving in Paris seventeen minutes over second place Roger Pingeon. All this with the added importance of the new ...Nuovo Record derailleur. 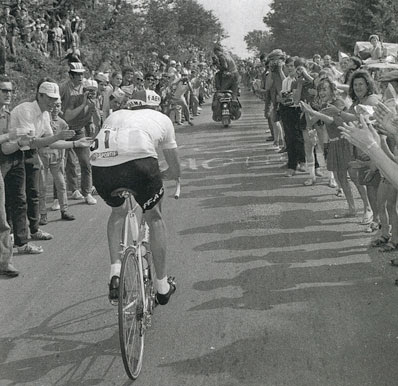 Jim said…
Jockey pulls? I have a pair of unused still in the package Campagnolo NR jockey wheels from back in the day? Interested?
November 21, 2010 at 4:44 PM