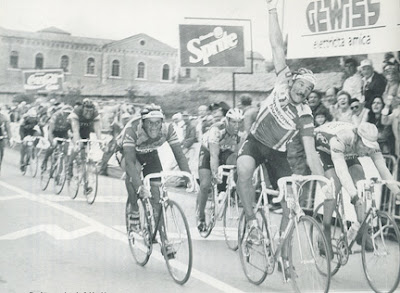 1989 Giro d'Italia...
With Movember over, good news from out of the Mo camp that Canada raked in the largest amount in donations (by last count around 15 million). I saw it fit to show another installment of 'Brotherhood of the 'Stache' (first posted here). 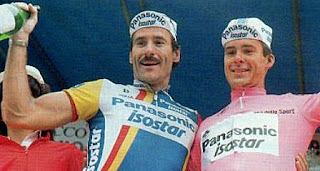 Here's a stache look at two riders endured to the Brotherhood; Urs Freuler & Lech Piasecki ...in the 1989 Giro d'Italia.

Swiss stache sprinter, Urs Freuler collected another stage victory in his huge Giro hat. After his first victory on stage 7, he came back and nudged first year pro, Mario 'Soon to be called Lion King' Cipollini to win his second stage. Amazingly, this will become Freuler's 15th Giro stage win. For Cipo, he never wore a stache but he deserves honorable Giro mention of a record 42 stage wins.

Lech Piasecki, the stache TT specialist won 3 stages, including two time trials. On the last stage, a time trial to Florence, he proceeded to clobber the favorites with his solo power. Notably, he beat out Greg Lemond, by a minute. We all know what happened in the following Tour. 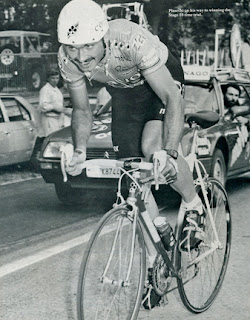