The Lion of Flanders 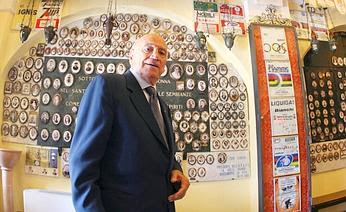 
This magnificent rider, from the golden age of cycling, had so much skill that he could challenge Fausto Coppi & Gino Bartali. His all around talent help him win three Giro d’Italia (1948, 1951 & 1955). But, further success extended outside the Italian borders.

Riders of the 40s & 50s normally raced in their own countries. Magni thought otherwise and proceeded to win three straight Tours of Flanders (1949-1951). After winning his third Flanders, in 1951, Magni became the second foreigner to conquer the cobbles. The Belgians knew for their beloved race to succeed in stature is from foreign victories. Fiorenzo Magni, the outsider, was soon recognized as the Lion of Flanders.

Like Fausto Coppi, who was also adept at riding over the cobbles, Magni rode over the pave like a true Flandrian. When Coppi won the 1950 Paris-Roubaix, the resilient Magni finished third.

Heartache surely came at the 1950 Tour. After stage 11, Gino Bartali won the stage and Magni took the yellow jersey. Bartali claimed that spectators threatened him after a fall, on top of the Aspin, with Jean Robic. The Italian team withdrew perhaps denying Magni of his place in Tour history.

His astuteness off the bicycle was equally famous. In 1954, he presented a team promoting Nivea skin cream. He changed the 'face' of cycling by bringing sponsors to cycle racing from outside the bike trade. Advertising as extra-sportif businesses that continues today.

Fiorenzo Magni is the president of the Museo del Ghisallo next to the famous Sanctuary of the Madonna del Ghisallo in Como. One of the oldest living heroes of cycling, he is the ever faithful patron of cycling. Creating a new home for all the momentos & trophies from legendary champions. A champion on and off the bike, Fiorenzo Magni has our unwavering gratitude! 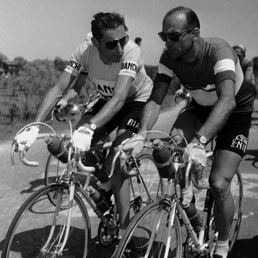 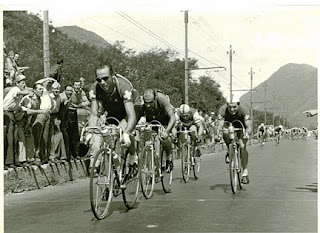 1951 Worlds...
Magni behind Koblet will finish with the silver.
photo: Marcel Segessemann

Jim said…
As always, a great post! Damn, I love to ride my bike. And seeing this kind of thing reminds me that I'm far from the only one! I love your blog for this reason.
December 7, 2010 at 8:43 PM