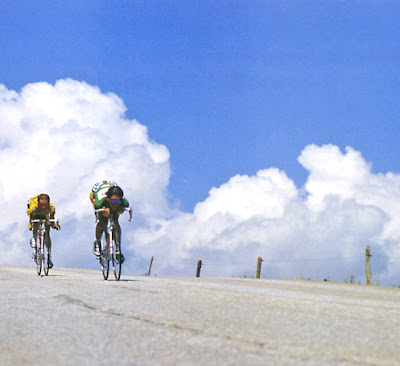 From out of the blue...
Abdou, with the maillot vert, between
Moutiers & Cluses 1994 Tour.
Photo: Deschamps
Djamolidine Abdoujaparov (one of the longest names in cycling) deserves admiration. Steadfast & deadly, he won three Green Jerseys (1991, '93, '94) & nine Tour stages. This compact and powerful rider from Tashkent, Uzbekistan was always at the ready, fearless & formidable. He was also an anomaly.
I'm bringing to light a story of the notorious sprinter from the insightful article from La Folie Du Tour entitled, "Abdoujaparov: le sprinter venu d'ailleurs," by Laurent Rigoulet.

As a 1983 recruit of the former Soviet cycling system, the sport allowed him to leave Tashkent behind. He was called, 'the Arab' and he was not well liked by the Russians sending him to the obscurity of East Germany. After the Berlin Wall came down his chance arrived. One of his famous exploits came riding the 1991 Tour. He impressed with two stages and in the final kilometre of the Champs Elysees, falling at full speed riding into an inflated Coke can. Concussed along with bruises and a broken collarbone, he was helped up by teammates and medical staff crossing the line 15 minutes after the peloton. He dramatically won his first green jersey. Robert Millar, upon seeing him on the road remarked, "He looked like he fell from an airplane."

For Abdoujaparov and his fellow sprinters, the sprint is called, 'The domain of eagles.' An exercise to cheat death where reasoning has no course with 100 meters left. A crazy world of hits and bone chilling noise. He said, "I try to grab the best wheel. I don't see nothing anymore. All I can see is the arrival banner. It's impossible to be scared, it's going to pass or crash. Why be afraid?"

He was a sprinter that put his head down and plough through, erratic and dangerous. Some of his nicknames were; Tashkent Terror, Tashkent Cowboy & Tashkent Terminator. And while other sprinters, like Jean Van Poppel, rode within the sprinters world of aplomb. Van Poppel was respectfully called, Monsieur Jean-Paul. Abdoujaparov was called by his adversaries... Kid Eater. Other teams feared him and even tried to corral him by boxing him in. He ended up winning by himself saying, "If I don't win, I'm sick. Without danger life is not sweet!"

In 1996, Djamolidine Abdoujaparov magnificently won his last Tour stage to Tulle, solo. A swan song? The following year, at the 1997 Tour he tested positive for Clenbuterol. His cycling career over he abruptly retired and ...quietly faded away. 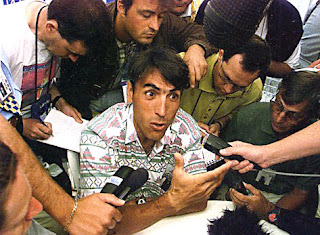 The end is near...
The sprinter explains his removal due
for doping, 1997 Tour.
Photo: Gaillard
book sprinters Tour de France