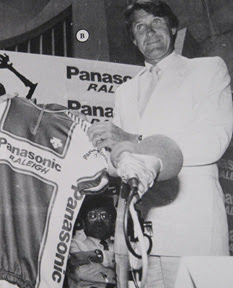 Peter Post reveals the new1984 sponsor Panasonic jersey
during the rest day at the 1983 Tour.

Upon hearing the passing of Peter Post, I was eager to do some research and I believe there were two sides to the man they called the Emperor.

For one, he was a monster for Six day racing. Thus the nickname, "The Emperor of the Six Days". He was the first dutchman to win Paris-Roubaix and in 1964 battled the cobbles setting the record for the fastest in a classic over 200 km (45.131 km/hr).

When he retire in 1972 he transitioned easily as successful director sportif for Ti-Raleigh. Known to rule with an iron fist of discipline he kept his riders in line. He was also an astute businessman able to secure Panasonic in 1984. With a bigger budget, strong leadership and organization followed... at a price.

"One of his principles was never to be satisfied, even when he won," said Theo de Rooy, who rode for Post for 8 years. Alan Peiper said, "Post ruled Panasonic with an iron rod. He had a very powerful character and most of us were frightened of him."

The Emperor that ruled! 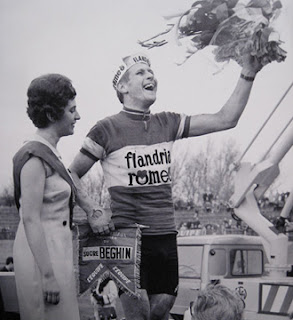 Michael said…
Though I was too young to have known of him during his riding years, he put together some tough Panasonic squads, full of scrappers and tough as nails types. He always had them were the action was.
January 17, 2011 at 8:38 AM

Richard said…
He 'thumb down' the English riders saying they were not hard enough to be international men. He was hated and liked
January 17, 2011 at 8:50 AM