This is a ABC Sport video on George Mount at the Montreal 1976 Olympic road race where he finished an astounding sixth place. There is a bleary eye focus on George Mount (in the stars n' stripes) as he finds himself in the breakaway going to the top of Mount Royal. The rain begins and many riders fall, the grind continues...

Up until then, no American has finished in the top 60 since 1912, nor ever in the top 10. He won the 1978 Coors Classic then raced professionally in the US and Italy. Compatriot Mike Neel was already racing in Europe and with his urging persuaded Mount to make the big splash in European racing. Mount raced for Italian squads; San Giacomo-Benotto (1980) and Sammontana-Benotto (1981-82).

This wonderful dramatic video (more of this race here) really captures the youthful eager spirit of George Mount able to stay with the best amateurs of the world and setting America's destiny into international cycling. 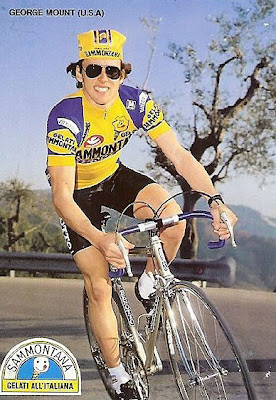 International Observer News said…
what a fantastic race, and an exciting finish. Maybe we should plan a cycling trip to montreal and ride the old race route. Though I'm not certain I'd survive.
June 1, 2011 at 8:34 AM

Michael said…
Cool find. I love images from that era, well, any era of cycling really. But now I wonder what ever became of Bernt Johansson?
June 1, 2011 at 9:04 AM

You're on! Carolle can be in the support car!

I'll be posting a something on him forthcoming a hint: he did turn professional after his golden ride!
June 1, 2011 at 11:02 AM