That was one strong British lead out train instigated by Bradley Wiggins, David Millar, and Ian Stannard.

With a few laps left, I was amazed to see the tireless Wiggins  up there pulling the British team. I wonder what he would've accomplished hadn't he not crashed out of the Tour. 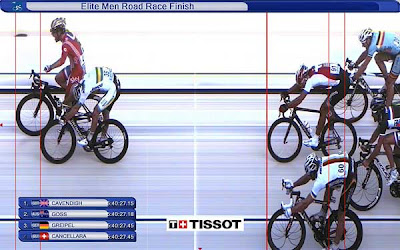 My praise goes to the British team for their superiority in controlling the later part of the race and effectively shutting out the rest of the teams from contention. Especially, as Cavendish saw his opening and snaked his way up the inside passing Goss for the right to be called World Champion. Greipel out sprinted Cancellara for a very close bronze. That was an even duel and I thought two bronze medals would be awarded (last years U23 road race here).

But, the British train was running fast (very fast!) and after 3 years of careful planning... the Manx Missile delivered big time!