The list of great riders that challenge Eddy Merckx during his Tour de France rule is impressive. In this equally impressive video called, Legends of the Tour de France, four famous men talk about their unique time against the Cannibal. Lucien Van Impe, Joop Zoetemelk, Bernard Thevenet, and Raymond Poulidor battled him but interestingly only one rider became his bête noir... Luis Ocana.

Ocana, equally aggressive had the panache to give Merckx a fright fight in 1971.

When Merckx was active, he ruled with total domination, and behind his peaceful exterior hid a worried and tormented soul. That's what I found in this excellent compendium of his five Tour victories, each one with stunning archival footage that's a joy to watch.

The Tour de France story of Eddy Merckx reads like a great novel. His beginnings full of great promise, dramatically clashing with rivals, always seeming invincible. He rode his last Tour like his first ... as cycling's fiercest competitor! 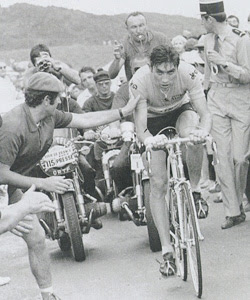