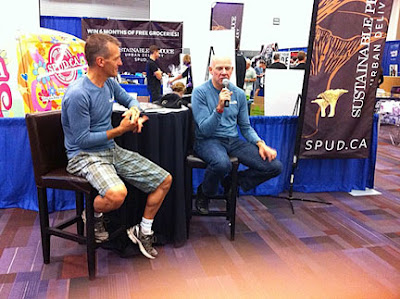 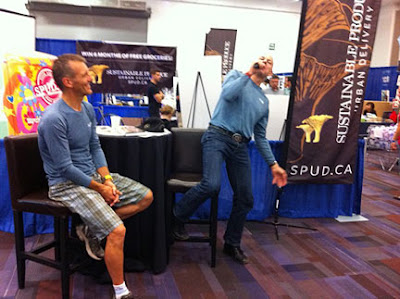 Bobke ...on a Roll!
(Both pics courtesy from Hans at Velospoke)

The Whistler Gran Fondo is tomorrow, and today was the last day for Velospoke a consumer cycling show here in Vancouver.

Hans emailed me these pictures and I want to thank him for use of them. I couldn't make it to the inaugural cycling show held in conjunction with the Gran Fondo. You may know the two personalities; that's Bob 'Bobke' Roll and Alex Stieda who both rode for the famous 7-Eleven team during the eighties.

Unfortunately, Hans won't be riding the Gran Fondo as he is recovering from a cycling accident. He took the pictures of the two ex-pros of 7-Eleven and listened to Bobke's funny and entertaining account of the famous 1988 Gavia pass with Andy Hampsten. He was a domestique in delivering warm clothes to Hampsten, surviving (story here) that blizzard stage and finished 61st.

In 1986, Alex Stieda was the first Canadian to wear the yellow jersey in the Tour de France. He finished in 120th his only Tour appearance.

Hans had them sign the new Team 7-Eleven book by Geoff Drake from VeloPress. In fact, our friends at VeloPress are sending Guy and I a copy where we will introduce it for an upcoming 3B's podcast.
book cycling exhibition/event fun Hans Sponsors