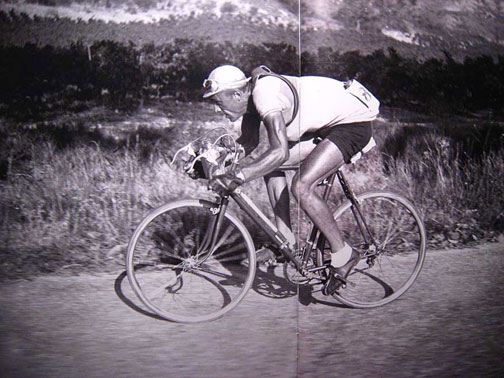 Inside there are many fine images by the famous Paris-based picture agency, Presse Sports. Here's a fantastic image of Frenchman Albert Bourlon. I did some research and happily discovered this striking image of Bourlon taken during stage 14 Carcassonne to Luchon. The stage was long... 253 km long and Bourlon broke away almost from the start and rode solo for the duration of this hot long stage, to win the longest solo in post-war Tour history.

I like this image of a bygone era, a time of;  very long usually hot stages, wool jerseys with front pockets, dust goggles to protect from the hazardous dirt roads and tin bottles stoppered with corks.

Like many riders of his time, his cycling career was cut short due to the intervening years of the Second World War. I believe Albert Bourlon is still alive today, he would be 94 years old.
favorite jersey's Hans Vintage Tour de France