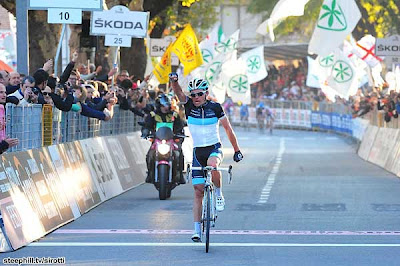 Hurricane Oliver...
storming to victory!
That was an exciting final Giro di Lombardia.

Making a confident move near the top of the final climb of the Villa Vergana, he distanced himself from Basso, Martin, Rodriguez, Niemiec and Pozzovivio. He said his radio didn't work after his surprised attack and he had no idea of the gap forming. Going full gas he managed an historic win: his first and Leopard-Trek's last win as a team. I enjoy it whenever a domestique has his place in the sun, it rarely happens and when it does... it's marvelous to watch.

Zaugg's kamikaze rush to the line was perfect as he beat a very dangerous, and on form, Dan Martin and Joaquin Rodriguez (3rd) by eight seconds. Mark my words, Dan Martin is a major threat to win a monument and it will be sooner than later. Honorable mention goes to Ivan Basso for a smart and strong fourth place.

A great finish to my second favorite Monument, Paris-Roubaix being the first, next season it changes dates to September 29. There's also a name change to Il Lombardia and ends as the grand finale of the season. Along with the new name change must surely come a new nickname. I couldn't guess what to call it. I was so set admiring it's traditional nickname "the classic of the falling leaves."

I'm trying to convince myself the change will be good. 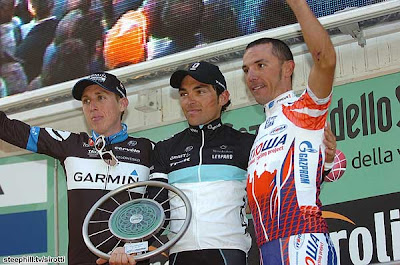 The Classics The Monuments video