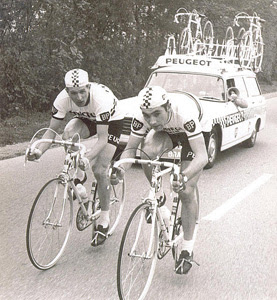 One item of interest that I discovered of Eddy Merckx's 1967 season with Peugeot-BP- Michelin was his fixation for his bike. Thanks to one of my favorite websites on vintage bicycles: velo-pages.com
Merckx was well known for his obsessive tinkering of his bicycles. His wife, Claudine said that he would awake in the middle of the night to go re-measure something on his bike. A well known worrier, Merckx had to have his bikes perfect. His bouts with insomnia were many compared with his equally many victories on the road.
The Cannibal didn't like how the stock Peugeot PX-10 bikes rode. So, he asked the great frame builder, Faliero Masi to custom build a bicycle. It was badged and painted, of course, in Peugeot decals but at the heart it was all Masi.
It stood out; no chrome forks/rear stays, no black paint on the lugs, and it sported a Masi decal on the seat tube.
During the 1967 season, Merckx showcased his enormous talents winning; Milan-San Remo (he also won in 1966), Trofeo Angelo Baracchi TTT (with Ferdi Bracke), Fleche Wallone, Ghent-Wevelgem, Criterium des As, two stages Giro d'Italia and the World Professional Road Race (Heerlen).
In 1968, he made his big move to the Italian Faema squad settling in comfortably riding his beloved bicycles made by ...Faliero Masi! 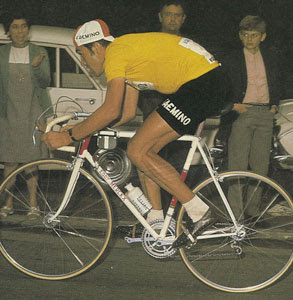 Unknown said…
The interesting question is why Eddy switched away from Masi after 1968. Marcel van der Este (probably working for Kessels) in 1969, Guiseppe Pela in 1970, and after that Colnago, DeRosa and Kessels for the rest of his career.
February 21, 2012 at 8:38 AM