SOLERing on a new road 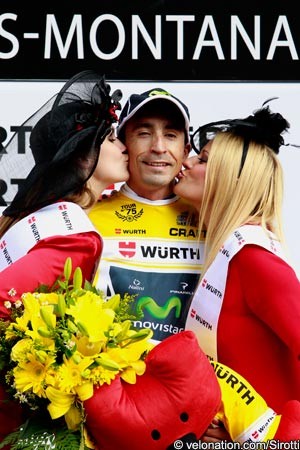 One man, who I respect, carries himself well in the face of adversity is Mauricio Soler.

The Colombian rider spent the last 4 months in hospital after a near fatal accident on stage 6 of the Tour du Suisse. Like many of you I feared for his life. Good news, he's released from Navarra hospital and at home in Pamplona with many rounds of painful rehab ahead of him.

Aiming higher...
Soler with his wife, Patricia.
(Movistar)
Watching him win stage 2 to Crans-Montana then wearing the leader jersey was extra special and proved that he was on the comeback trail to brilliance. I remember his amazing win to Briancon and winning the polka dot climbers jersey in the 2007 Tour de France, got my attention that a dawn of an new age of Colombian grimpeurs are back.

I wonder if he will ever return as the bike rider we remember him by?

But, there are hints, if not confident words to believe in miracles...

Soler's wife Patricia said, "Doctors tell us that the spirit of a cyclist is also serving him well for his recovery."

And Mauricio Soler said, "I'm putting all my energy into this, but it has to be this way, I don't see any other one. We have to be patient, only time will tell about that. It would be fantastic to return riding, but now I'm most interested on my own recovery."