Brotherhood of the Stache: Jeff Bernard 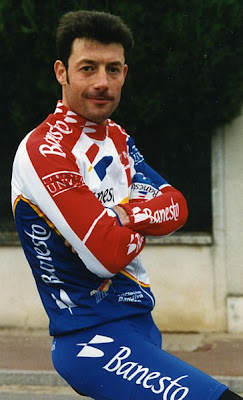 Banesto Stache
(Eric Houdas)
Jean-François Bernard was placed in the uncomfortable position to be heir to Bernard Hinault.

That's tons of pressure for any rider acclaimed as the next great French cycling star. As it was, Jeff Bernard raise the bar ever closer by wearing the maillot jaune and winning two stages, both time trials, in the 1987 Tour de France. That's the dreaded Mont Ventoux time trial where he put in a pure power performance his face masked in pain and courage to win from climber, Lucho Herrera (second at 1'39"). He finished a brilliant third overall behind Stephen Roche and Pedro Delgado. Perhaps he was destined for the coveted title of successor to the Badger. 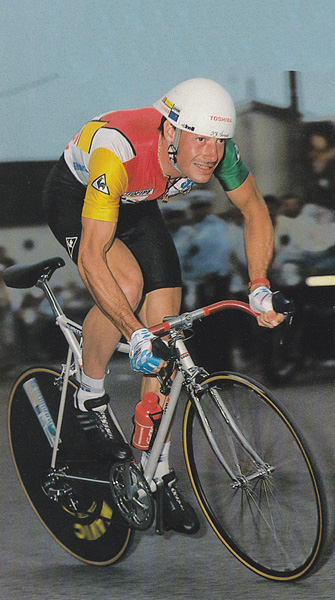 Early Toshiba stache...
Bernard churning a huge gear to win.
1987 Tour de France.
(Numerius)
But things changed for Jeff Bernard. In the 1988 Giro he crashed in a tunnel injured his back and abandoned the race after winning three stages. Then a knee operation that required months of recuperation was the beginning of the end and his leadership role of the 1988-1990 Toshiba team was on tender hooks with very few wins.

In 1991 he joined Banesto, not as a leader, but a domestique to Miguel Indurain and Pedro Delgado. Bernard was comfortable in the less pressurized role as worker helping Indurain to Tour victories.

In a 1993 L'Equipe interview Bernard said, "I'll never be leader. I can't be someone that you can count on 100 percent and if you ask that of me, I lose half my power."

As Movember (pls donate here) continues, Jeff Bernard gets my nod as a member of the brotherhood of the stache remembered not as a leader but a highly, talented hard worker.
fun Inspiration