A Canadian in Belgium 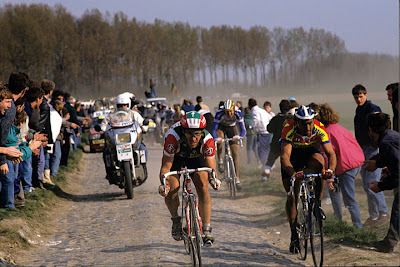 Two Flandrians...
Steve Bauer  & Eddy Planckaert relaxed over the cobbles.
As I sit back after a hectic day 3 of Make It, I'm so pleased of the very positive response from our new and returning customers.

I'm humbled that a customer from last year's show returned back to purchase three more of my cyclingart postcards and asked if I had larger prints to offer. I mentioned to him that it can be arranged.

I met Cam, who is a kindred spirit, a lover of cycling, owner of Italian steel (Rossin) and a real true enthusiast of the sport. It must've been his Campagnolo Record gruppo t-shirt that gave it away. We had a nice chat of his trip, last year, to watch the big three cobble classics: Paris-Roubaix, Tour of Flanders and Ghent Wevelgem. He said it was so amazing to watch Cancellara fly up the Muur being chased by Boonen.

And we talked after he bought one of my postcard's depicting Steve Bauer in Paris-Roubaix of his daring ride to an epic finish against Eddy Planckaert.

It was no surprised that Steve Bauer loved Roubaix. He was stocky and strong, made for the cobbles. When he turned professional, Roubaix was the raced he loved and he made his home in Belgium. In 1988 he finished eighth, a solid result enough to give him the confidence to one day win it.

In 1990, Bauer was there gliding over the cobbles believing and making it happen only to lose by a centimeter by Planckaert.

Then, Cam said while he was in one of Belgium's cobble classic races, he mentioned he was Canadian and some locals said one name, of course out of deep respect... "Steve Bauer."
Paris-Roubaix Steve Bauer The Classics The Monuments