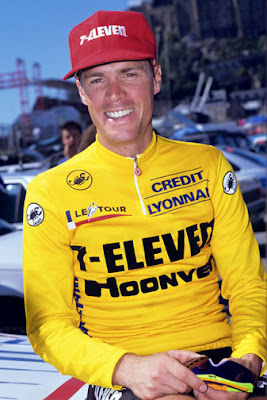 7-11 yellow for Bauer.
Steve Bauer rode for GS Mengoni in the early eighties and he often tussled with Team 7-11.

Geoff Drake, the author of the excellent book Team 7-Eleven, stated, "Canadian powerhouse Steve Bauer was a constant antagonist for the the 7-Elevens until he finally joined the team."

I remember reading a issue of Winning, Bauer and Davis Phinney were rivals but in this particular criterium (I wish I could remember the name of the race) they rode against European Pros. Together the two amateurs put on a good show forcing the Pros on their heels. I believe Phinney won that. Eddy Merckx was there and commented that the Pros should always win against the amateurs. In this case the amateurs got the better of the Pros.

Bauer and Phinney would often duel against each other in the American criterium circuit often jostling for victory.

In 1990, Bauer joined the 7-Elevens and came very close to winning Paris-Roubaix, losing by one centimeter to Eddy Planckert. At the 1990 Tour, Bauer went on a tear on stage one and was part of a four man breakaway finishing 10 minutes on the field. Together with a strong prologue and team time trial, Bauer held the coveted yellow jersey until stage 10. 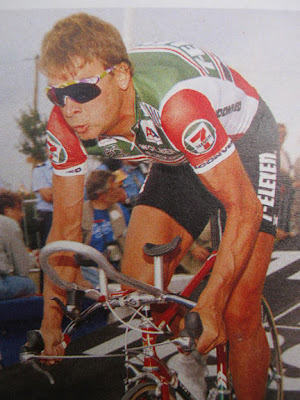 Touriste-Routier said…
I believe the race you are referring to was the 1983 USPRO Championships, which were held in Baltimnore. The race was held as a 100k crit in 82 & 83, before the Philly race was started in 85. Since there were very few domestic Pros at the time, elite amateurs and foreign pros were allowed to compete, with the first US Pro getting the national title (John Eustice in both years)
September 8, 2014 at 3:43 AM