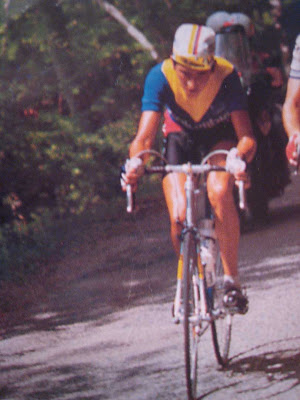 Lately, I've been thinking about les grimpeurs of the Tour de France, the fragile stick thin riders that are a marvel to watch dancing up that mountain. The specialist climbers.

The Colombian national team were given an invitation in the 1983 Tour. The globalized Tour. Virtually unknown they gave it a go in their daunting first Tour attempt, with Alfonso Flores as captain. Before the race, some even considered Flores, the winner of the 1980 Tour de l'Avenir, a dark horse. Unfortunately, Flores abandoned but team mate, Patro Jimenez showed his gift for climbing. He would be the first Colombian rider to wear the coveted KOMs jersey, wearing it for five days.

I first watched the 1983 Tour out of curiosity and in 1984, I watched with interest, the savy Colombian amateur team explode as Luis Herrera won L'Alpe d'Huez. Becoming the first stage win by a Colombian, non-European, and amateur.

This is enjoyable footage I've never seen of the 1984 race by French television. The fact, the Colombians were viewed as exotic riders and blamed for their clumsiness was the on going perception at the time. Luis Herrera helped changed that... becoming a Colombian hero!