The Flea of the Mountains 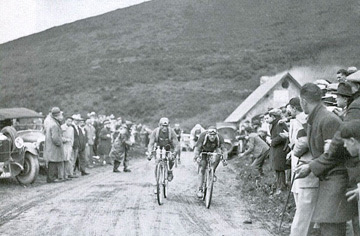 At the 1933 Tour, Henri Desgrange introduce a category and prize that recognized those crafty riders that love the heroics of the mountains... the grand prix de la montagne.

Riders of slight build that excelled when the road heaves upwards need only apply.

Ever since 1905, big climbs has been part of the Tour as the riders were subjected to the Ballon d'Alsace for the first time. Afterwards, the spectacle simply went higher; the Chartreuse mountains (1907), the Pyrenees (1910), the Alps (1911). In the 1930s, Desgrange changed the format from trade teams to national teams thus helping to lure out top Spanish riders. 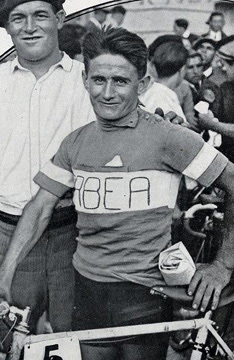 Vicente Trueba, riding as an independent touriste-routier, was adept at bounding up mountain cols like a flea. He did not win a stage but was first over the challenging Cols d'Aspin, Aubisque, Peyresourde, Tourmalet, the Vars, Ballon d'Alsace and the Col du Galibier.

I like his nickname, "The Torrelavega Flea", known to ride away from his adversaries as if he had an electric motor as legs. He was short and compact around 100 pounds riding a 18 inch frame. Back then, riders didn't use derailleurs. They used a double sided hub and had to stop to remove the rear wheel, turn it around for the desired ratio and put back the wheel. A time consuming, stressful way to race especially over unpaved roads, at times in atrocious weather during long exhausting stages. 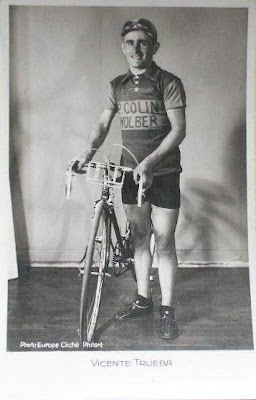 Courtesy Willem Dingemanse
cyclingarchives.com
Trueba wasn't a good descender but managed to finish sixth overall and was the first winner of the grand prix de la montagne in 1933.

Too bad, he didn't wear the flashy polka dot jersey, as it wasn't introduced until 1975. It was sponsored by the chocolate manufacturer, Poulain. The Flea, bounding up the cols, would've looked even more flashier! 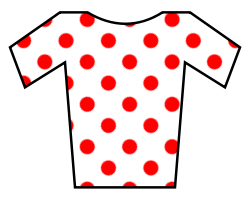