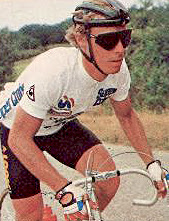 The first time I had the pleasure to watched Steve Bauer, was his convincing win at the 1982 Canadian National Championship Road Race in Edmonton.

Watching him control the race and zip up the steep Emily Murphy hill as if it was a training ride ... I had to do a double take. He dominated that race.

I knew, from that time, this talented rider was destined to ride, one day... the Tour de France.