Ji stayed out in front, for the first 240 km, with a group of nine riders. Also, part of that
attacking group,was Juan Pablo Suarez of the Colombia-Coldesportes team, both young riders new to la Classicissima. We can be thankful in knowing Carlos Quintero's crash, initially horrific from the helicopter pictures, wasn't life threatening. He went down on the descent of Le Màrnie and I couldn't help thinking of the late Wouter Weylandt's death in the Giro. He's in hospital awaiting a second CAT scan, clearing that he can leave with no serious damage; fracture cheekbone, collarbone and bruised lung. Vladimir Gusev (Katusha) was another unlucky rider, crashing on the Cipressa with fractured ribs. 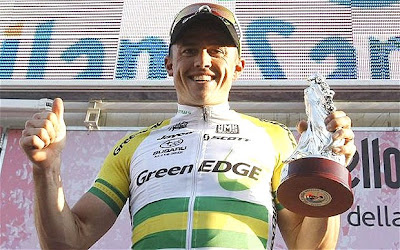 
The Poggio is the tipping point of this great race where the big move formed on the descent. Nibali attacked bringing along Gerrans and Cancellara, wanting badly to win on his birthday. Cancellara looked like a human locomotive doing the majority of the load and like a kamikaze on the downhills.

Gerrans was the smartest and what a glorious monument win for Gerrans and a perfect start of the season for GreenEDGE. Their team looks formidable and built tough for the classics and will want to keep on winning. For Cancellara, with the upcoming Belgian classics, he's certainly licking his pave chops.

I firmly believe if the Liquigas roles were reverse, Sagan (4th) would've taken the sprint. The Italian squadra may have to re-jig their tactics.

My team revelation has to go with the successful 1T4i team, they were part of the initial break (Ji) and at the end, excellent finish for John Degenkolb (5th), Simon Geschke (13th) and Koen de Kort (19th).


Simon Gerrans wins his biggest of his career...

"This is an amazing feeling to win. I have to say that it's better than I could have hoped for!"


Get ready for the squeals!
GreenEDGE cycling team Milan-Sanremo The Monuments video