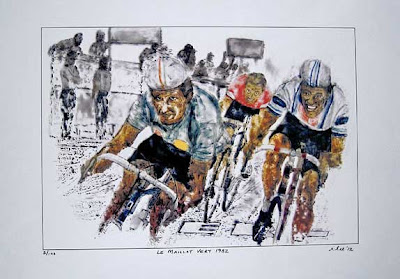 Sean Kelly is one of the best analysts of cycling, here's his thoughts on Evans, Wiggins and the other favorites...

Kelly is a former four-time Maillot Vert winner and during his time was one of the toughest in the sprint. His first Maillot Vert victory was the 1982 Tour, winning one stage and finishing 15th overall.

Tomorrow I'll be at the Canada Day Craft Show, and Red Dots Cycling will have my Cycling Art prints for sale. The print (above) is titled, 'Le Maillot Vert 1982.' It honors Sean Kellys' tenacious riding to win his first Maillot Vert.

Watching Fabian Cancellara's blistering ride today was like watching an accurate Swiss time piece. Since his shattered collarbone from the Tour of Flanders, his form has been questionable. Not anymore! Spartacus was 7 seconds faster than Wiggins turning a time too hard to beat. He now makes Tour history and ties Bernard Hinault as the only two riders to take the yellow jersey on five occasions. 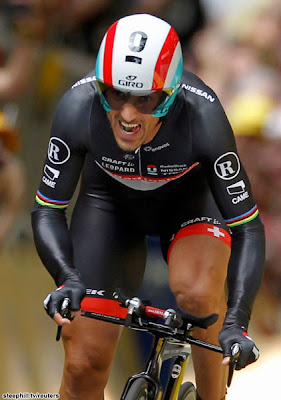 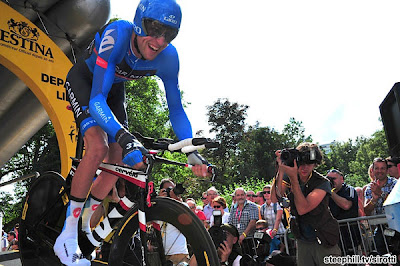 Michael said…
Cancellara looked so powerful during his circuit. Too bad about Martin's slip though. Wiggins was impressive too, I guess he made up a lot of time in the second half.
June 30, 2012 at 6:48 PM