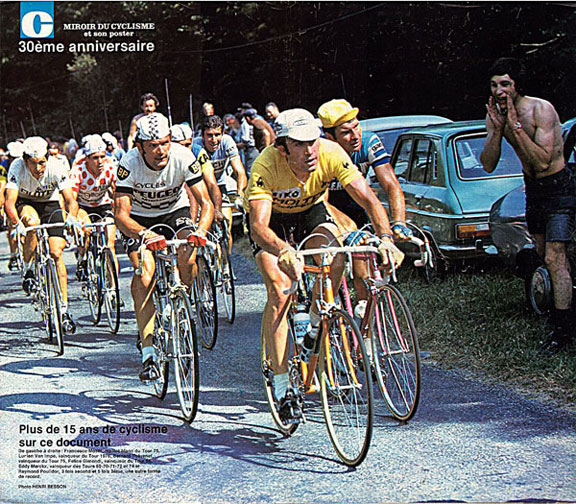 You couldn't fault Eddy Merckx for showing his powerhouse champion form winning the first two ITT stages of the 1975 Tour. He put himself in position, taking over the yellow jersey from Francesco Moser, to win a record sixth Tour. The classy Francesco Moser was riding his first Tour, won the  prologue, stage 7 wore the yellow jersey (7 days) and eventually winning the Young Riders classification.

In the high Pyrenees, a new rival became a threat capable of pressuring Merckx... this was Bernard Thevenet. Most bizarre, Merckx climbed the Puy de Dome ...and was punched in the liver by a spectator. The next day, was the coup de grace by Thevenet sensing a wounded Merckx (perhaps still feeling the emotional and physical effects from the punch) and attacked him on the climb of Pra-Loup, passed him winning the stage and the maillot jaune.