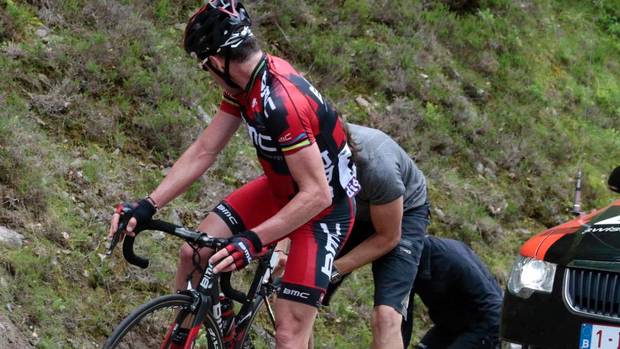 Thumbtacks were the reason for the 30 or so punctures on the climb up the Mur de Peguere about 40 km from the finish. Dramatic image of one of the victims, Cadel Evans waiting patiently for a rear wheel change, by a Jim Ochowicz, losing around two minutes.

Robert Kiserlovski broke his collarbone and abandoned the race. He was trying to help Janez Brajkovic change a punctured tire when Levi Leipheimer crashed into him. Fair play from Sky slowed the race so everyone could catch up. Luis Sanchez was sparred and won his fourth career Tour stage.

That's the way things go in life, karma hopefully comes around. Couldn't see them on the road... this has happened to me before two times in Spain. That's why I don't race in Spain very often. Sorry for the good Spanish people and my Spanish friends and people in Spain who support me but there's a few people that just stake things too far.