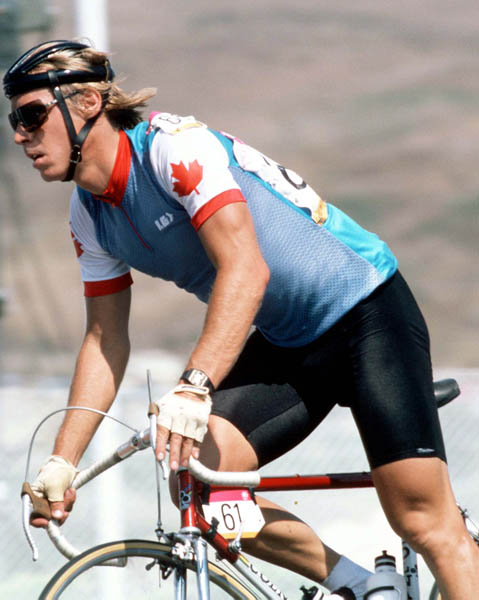 Canadian cycling was changed for good when
Steve Bauer won the silver in the
1984 Olympics!
via collectionscanada.gc.ca

In Canada, during the eighties, our collective cycling butts were shaken and moved to a point of no return.

Steve Bauer, and his silver medal 'win' (it may be silver but it was a huge silver) in the 1984 Los Angeles Olympics road race galvanized our young cycling nation and turned in 360 degrees. It was a marvelous achievement that a Canadian rider could ever and can achieve monumental success in world cycling. It gave a promise that Canada can challenge the very best cycling nations... successfully. Bauer already won a handful of races in North America and was Canadian National Track and Road Champion.

The bike shops in Edmonton were few, I believe two or maybe three, but the excitement started to grow with Bauer Power. I got so excited by it all and went out and bought my first road bike, a navy blue Cambio Rino. I didn't really know a thing about racing but I joined Velo City and perhaps, more importantly, belonged to a unique world.

After his historical feat, Bauer was the first Canadian to medal in the Olympic cycling road race, he set his sights on the World Championship Road Race in Barcelona. Bauer showed more and went on to a historical bronze finish. Again, a first for a Canadian rider to medal in the World Championships. Surprisingly, I never seen the race and most likely never broadcast in Canada. No surprise there. I think the only media report was a very small print in the back of the local daily.

To my pleasant surprise I discover this YouTube video of the race. It's in Spanish and a wonderful testament to Steve Bauer and his amazing sprint to win the bronze in what looked like a very long, hot day in Barcelona. It covers the last 30 minutes but it rekindled that excitement once again. As I watched this video, I can't help but think how Ryder Hesjedal's Giro victory is positively impacting Canadian cycling!

Unknown said…
What you left out was that the world championships were a week or two after the Olympics and Bauer raced in the pro race. Silver in the Olympics, a week later bronze in the Pro World Championships.
October 24, 2012 at 3:26 PM