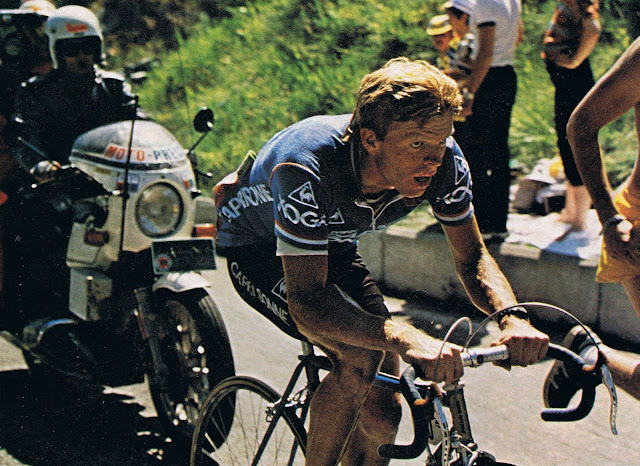 The 2013 Tour de France will be special.

It's the centennial edition and the big party will be held entirely in France. It will begin on the French island of Corsica on June 29 and end with an evening finish on the Champs-Elysees on July 21. The most significant change is stage 18, the historic Alpe d'Huez is back, not once but twice. The first passage to the top of Alpe d'Huez will take place 50 kms before the finish at Alpe d'Huez. It's 21 steep switchbacks will be climbed twice... the true test.

The Tour first visited l'Alpe back in 1952, won by the elegance and class of campionissimo Fausto Coppi. Alpe'd'Huez is the 'Dutch Mountain', a Dutchman having won eight of the first 14 finishes.

Two-time winner, Peter Winnen triumph in 1981 and 1983. In 1981, his first attempt in theTour, Winnen had a special bike delivered to him the morning of the stage. A lighter version Koga Miyata was delivered to him at the stage start. Winnen made good and rode it to victory. 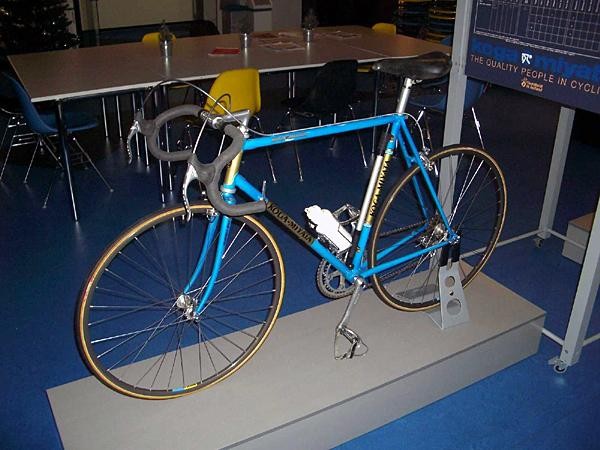 Here's an except from Cycling Sport with Peter Winnen and his take on twice conquering L'alpe d'Huez!


Were you surprised to win in 1981 at your first attempt at the Tour?

Yes. It’s funny, because I had more difficulty winning when I was more experienced. I guess I hadn’t learned enough to lose when I was a new pro. When I was young I just raced. When I got older I thought more. Always a bad thing for a cyclist to do.

What sticks in your mind the most about the first time?

The pain. It was so hard, so hot. And I remember the smell of a barbecue. Everything else was just noise and a blur of people, the motorbike engines, the clattering helicopter. Too much for your senses to focus on, except for the smell of this barbecue. And then I remember looking up and seeing Alpe d’Huez, just some grey buildings against a blue sky, like a mirage.

When did you start to feel confident that you would win?

I had time checks from my team manager Walter Godefroot, but you can’t really concentrate on what people are saying to you. Managers like to give you advice, but you can’t focus on it, it’s really just something for them to say so that they feel they are helping. After the last bend, when the road becomes wide, I began to believe it was possible then.

That was different. There was plenty to focus on because I had company all the way to the top, and in the end I was in a fight right to the line with Jean-René Bernaudeau. We rode hard and dropped the others from our break. After that it was more tactical.

It looked a pretty desperate sprint between you two at the end  It was. I didn’t feel good, we were both tired. Sprinting for the stage on Alpe d’Huez is a tough job. It must have looked strange, us, two non-sprinters slowing down and looking at each other. I must have had just a little bit more left inside me than Jean-René.

And, lastly a very interesting post on the history of the legendary Koga Miyata, the bike company. 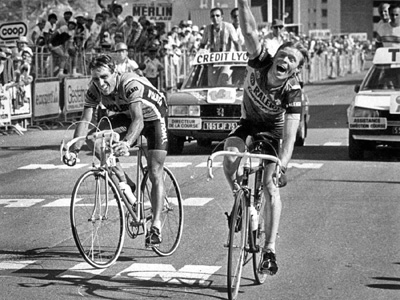