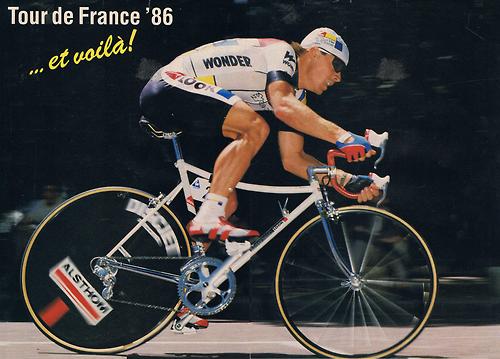 I remember fondly when Steve Bauer first rode the Tour de France in 1985... he finished in 10th overall - it was phenomenal. He spent 17 days leading in the young rider's classification and Canadian fans would be screaming, 'Bauer Power!'

Journalist, Robert Zeller from the Globe and Mail was one of the handful of reporters dispatched to cover Bauer in his inaugural Tour. His daily reports - were important reading, opening Canadian fans to the Tour and making Bauer an instant cycling hero.

This is a superb image of Bauer riding one of the two TT stages during the 1986 Tour, his second year as a professional for La Vie Claire. He finished a solid 23rd overall.