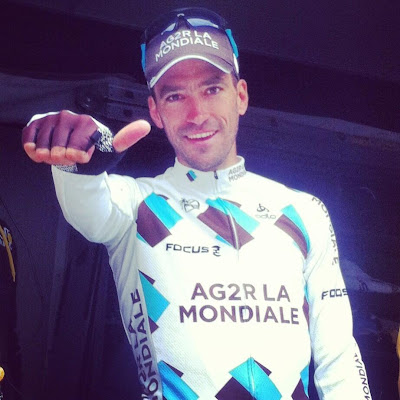 
Thrilling right until the end, Christophe Riblon gives France her first victory atop Alpe d'Huez. It's about time and it was getting too close to the finish to even imagine this great 100th edition without a French rider in the victory column. 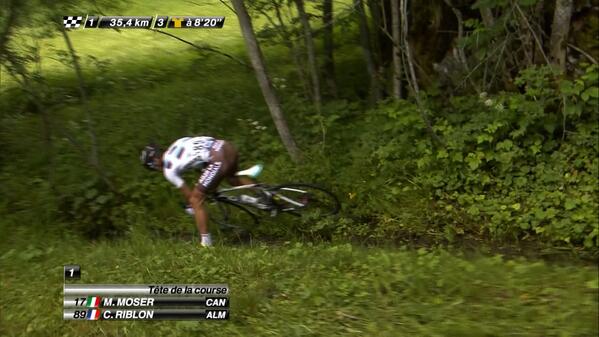 Thrills & spills!
Riblon falls into a marsh down the Sarenne.


“When I was about eight years old, I saw on the TV a victory of a cyclist at Alpe d'Huez and I hoped that one day maybe I could do it too. Today, when I saw at the start of the climb that van Garderen attacked me I knew I couldn't follow him and I told myself, ‘S---, I finish second like two days ago...' After, at three kilometres from the finish, I saw him and he didn't look good so I started to believe in my good stars. And I sprinted and the public supported me and I'm in the sky!

“It was a crazy final. At five kilometres to go, I no longer believed it was possible. But Julien Jurdie was in the car, and he still believed in me and never stopped encouraging me, saying, ‘He's bonked, you'll catch him!' At that time, I was riding for second place so I was giving it my all on the climb. Then, when I saw him ahead of me, I realised he had the very distinctive position of a rider who is not coping. So I came back up to him, and I absolutely did not want to leave him any hope that he could accompany me… I had no hesitation and I immediately attacked. It's a huge thrill to see the race reversed."
“I remember the last time when Pierre Rolland won here, I thought I missed something, and this time it's great to raise my arms at Alpe d'Huez. On this Tour the team fought hard but we lost two riders with fractures, Maxime Bouet and early Jean-Christophe Péraud yesterday. This morning, we are told that we had ward off bad luck, and finish our Tour with our heads."

It's All About the Beer! 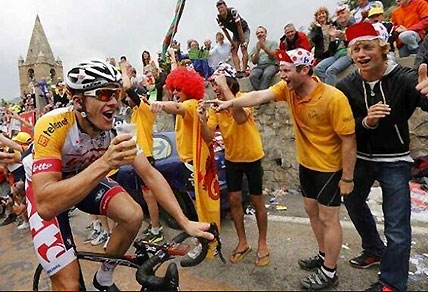 Adam 'the Croc Man' Hansen has a cold one at Dutch corner.
via twitter

One of the craziest images from the Queen stage is Aussie Adam Hansen enjoying an amber ale and having fun with fans at Dutch corner. The beer must have worked, he finished the stage in 59th beating Cadel Evans, Dan Martin and Rui Costa. 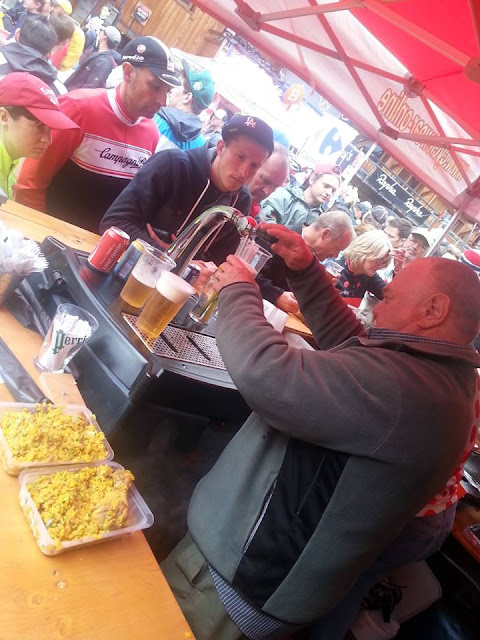 Beer rules on Alpe d'Huez...
add some Paella and voila!
via RoadBikeAction 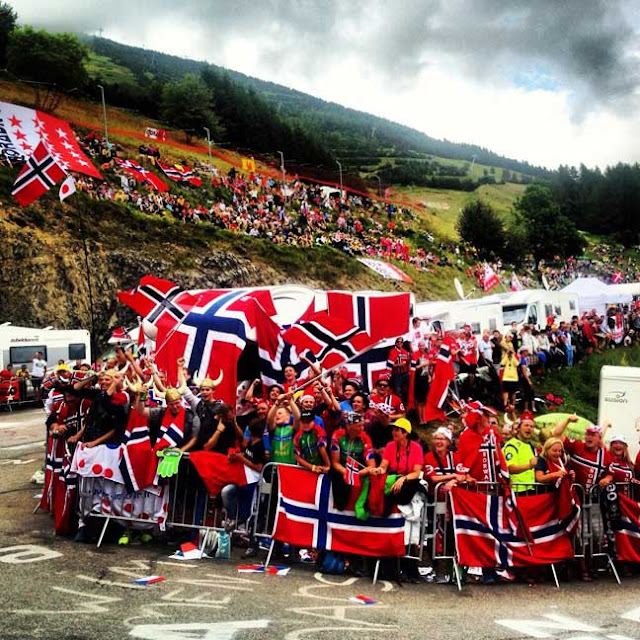 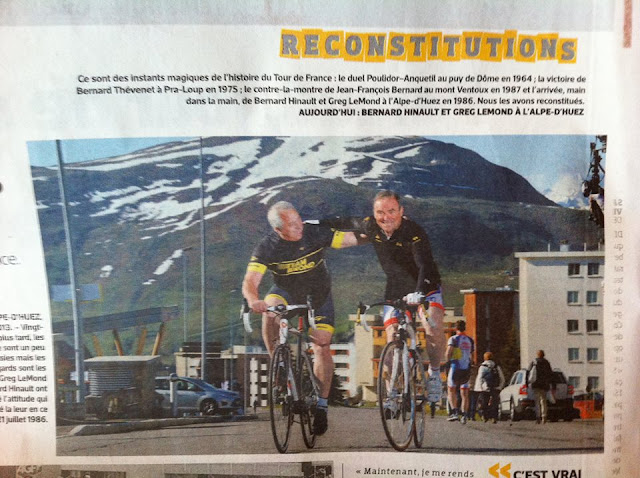 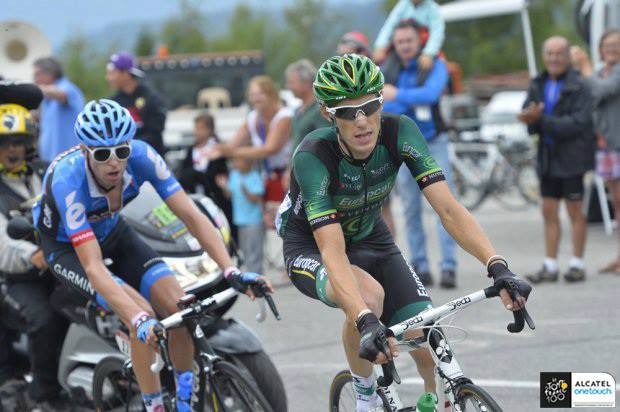 Cresting on top of the Col du Madeleine,
Today's 5 Col stage 19 was animated by Ryder Hesjedal
for 130kms then he was joined by Pierre Rolland. 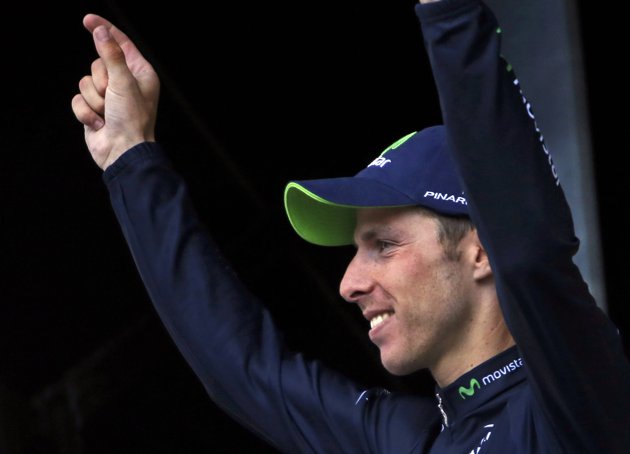 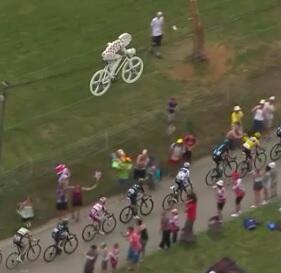 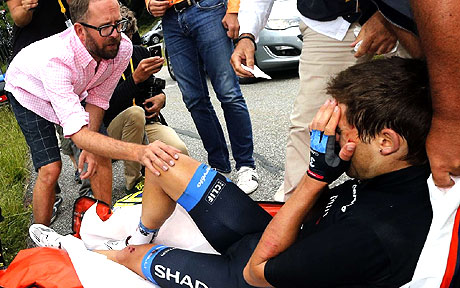 A sad ending to his debut...
Jack Bauer abandoned today's stage crashing into a barbed wire fence.
via BrakeThrough Media/Velonews

“He got going again on the descent, and just because there were cars coming by on the descent, on his left hand, I think he got a little spooked by one of the cars, and the mechanic was pushing him, and he kind of adjusted, and he went off the side of the road and it was where the pavement had a big differential, and he went into a ditch and just lipped over right into this half barbwire — I don’t know if it was electric or not, but the way he was screaming, it sure seemed like it. The wires went into his face. It was … really unfortunate accident. No one really to blame, just one of those things that happens when people are tired and the tension is on.”

And the good news...

“He’s fine. He had a bunch of stitches in his face, so for all the ladies out there, he’s a little uglier than he was before. But don’t worry — it’ll heal up.” 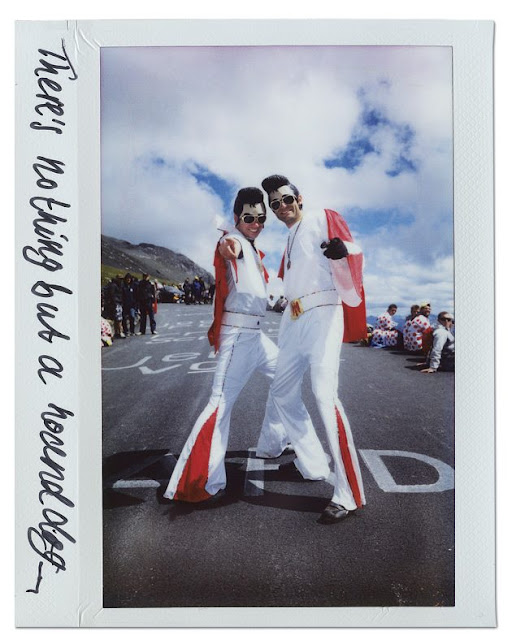 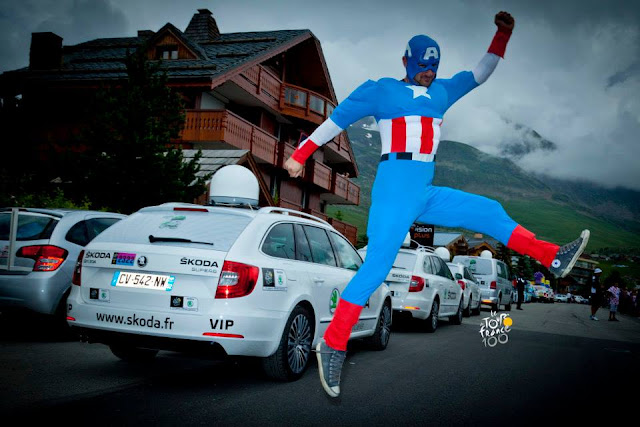 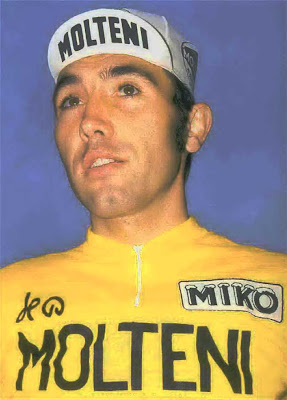 King Merckx was regal with
the cycling cap.

I'm a cycling purist. I firmly and wholeheartedly support the
traditional cycling cap. Bill Strickland writes for Bicycling.com and is the mastermind behind the online campaign, you probably know the twitter hashtag, #capsnothats

The great Eddy Merckx always wore one with a sense of panache, on and off the bike. There is an elegance of the classic cycling cap. Put to shame with the baseball cap. For years it has been put away from the limelight and shunned by the pro's. Until now. 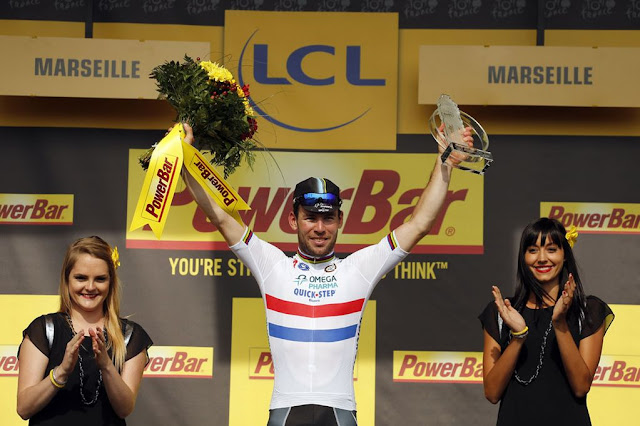 Caps Not Hats approved by Cav.

The great news is that the tradition of the cycling cap has shown signs of returning back to, although slowly, the podium. The four podium wins from Omega Pharma proves the point that it rightly belongs on the podium or for that matter - anywhere in cycling.

Chapeau! to Omega Pharma and Bill Strickland for bringing back the glory! Read the article here.

Who was the first winner of the Tour? 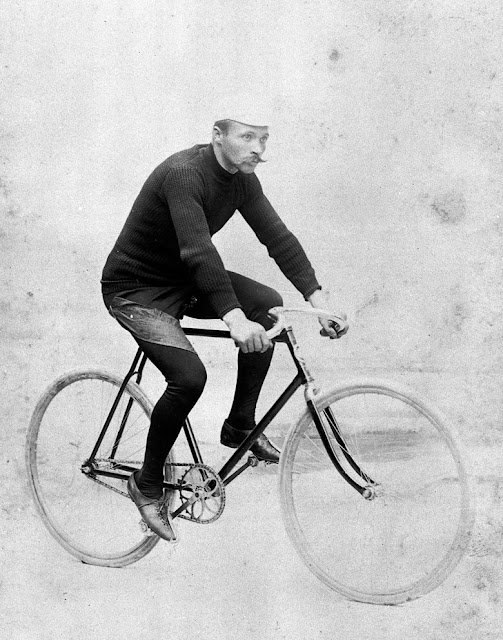 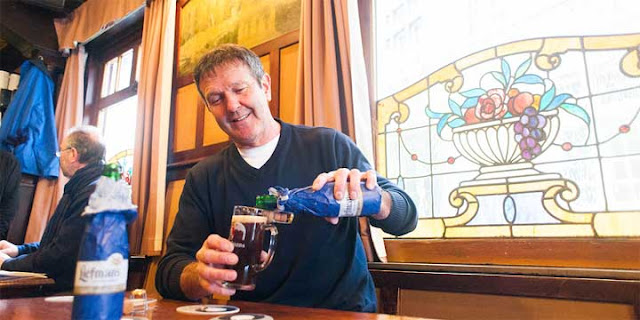 “I won the Tour of Flanders in 1977, and I often came here as a spectator afterwards. I’ve found the crowds a bit too much in recent years, and I prefer to enjoy the Tour from my easy chair. Will I still drink a dark beer while watching? Yes, why not!” says RdV