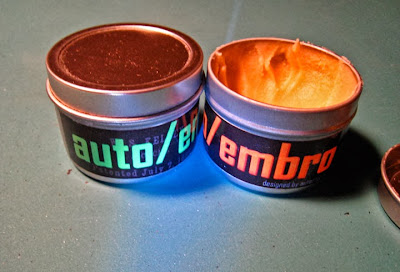 Saturday's ride was thankfully free of the the heavy fog we have endured over the past few days. It was so thick at times, I didn't know whether to ride with ...a fog horn. The Sun wasn't around, it was overcast and cold for me (8C), time for heavy artillery...

Out comes my favorite auto/embro from Autodrop Ltd. I questioned the effectiveness, after sitting on my shelf unused, for months. The homemade formula created by Erich and Barry of Autodrop Ltd. works perfectly. I noticed on their website the embro is currently out of stock, you can email Erich and Barry as to when their new batch will be available.


After my Fall ride, I was left to ponder ...why I was narrowly run off the bike lane by an impatient SUV driver? Sure, it happened to be full moon but that's not an excuse. He floored it on a single bike lane and I was forced to yell at him to SLOW DOWN! Afterwards, this crazed motorist did so. Why can't we all get along?


Ever since moving to Vancouver in the late eighties from Edmonton, cycling has grown considerably. Vancouver now has numerous bike lanes and riders. Bikes share, precariously, with the existing roadways dominated by the car. It's an uneasy alliance. I feel, at times, that the bike is still identified as a toy here in North America, at times mocked at. The respect of the bicycle as an everyday mode of transport in other parts of the world happily exists - co-habitating with the car...

There is a unique cycling model in the Dutch city of Groningen: The World's Cycling City by Streetfilms.

After watching this insightful and inspirational video it reminded me of my time in Amsterdam. In 1983, I witnessed the same love/respect for the bike - devoid of cars. And I thought that the Dutch folks were either crazy or tough as nails to ride on the icy cobbles without wearing head protection. I had to let go of my Canadian pretensions of riding a bike in the Winter. Hell, I never rode my bike in wintry Alberta, it was too dangerous to risk crashing on the hard icy roads or getting side swiped by a car. One image I can't forget is of a elderly lady, white haired, rolling effortlessly on a dutch bike on the icy cobbles and going at a damn good clip too!

Although, we may not be a model cycling city like Groningen (not too many cities are), we'll always have to share the road with the car. Groeningen has the advantage of a well-planned infrastructure to limit car traffic to the perimeter of the city center thus allowing bike use. Vancouver has an increasing number of cyclists and motorists, at times, not always bike friendly. We have a some work to do; getting more folks on bikes and less in cars with education encouraging the heath and sustainable benefits of riding a bicycle.

For now, when I'm on my bike, I'm willing to discourage the odd speeding motorist and to tell them to ...Slow Down!