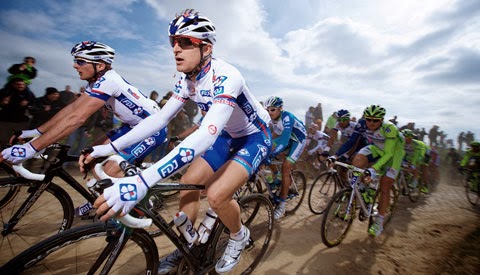 Rollin at the 2012 P-R
via Kristof Ramon

There are many riders still looking for a professional contract and that includes Canada's Dominique Rollin. If he doesn't find a team for 2014, he said he would retire and go back to school. That's more than admirable but I can't help but feel a little greedy - I would like to see him continue as a pro and conquer the cobble stones. We'll have to wait for the final word from him. So for now, here's Michael Barry's 2012 excerpt of Dominique Rollin, a time capsule on Canada's tough classic rider...


Rollin at Paris-Roubaix (video in French).


After the cobbles, flat tires and crashes it was hard to keep track of how many riders were left in the front group as we raced towards Roubaix. My guess was 15. Fortunately, there were no sections of pavé left in the race. Paris- Roubaix had torn the peloton to pieces. I could feel every short hill, no matter how shallow the gradient. They were undulations we wouldn’t usually feel, but at the end of the race, this was where some riders were dropped and others surged ahead.
From our group, Dominique Rollin attacked on every one of those hills, and with each attack someone chased him down. He recovered in the group for what seemed like a few seconds before he attacked again. His accelerations were potent. Some riders eventually gave up and eased off the pace, but he was persistent and motivated, as if he were racing in front of his family and friends. Maybe that was because Roubaix was once his hometown.
Riding for Velo Club Roubaix, Rollin lived at the Roubaix velodrome for a season. He rode the final 15 km of the course to the finish line on the track almost every day. This time, his final surge to the line wasn’t driven by getting a good result but by his attachment to Roubaix, a place where he started his cycling career.
Seated on a bike, Rollin doesn’t have the usual physique of a professional cyclist. Unlike most riders’ thin legs and arms, Rollin’s legs are muscular and his back, gluteus and arms look like a hockey player’s. But, he doesn’t pound on the pedals the way a strongman would, instead he spins at a high cadence with graceful fluidity. His style and position aren’t innate, he learned and developed them when he was an amateur in France. He looks like he’s made to ride on the cobbles.
In his fourth year as a professional based in Europe, Rollin is now racing with the FdJ-BigMat WorldTour team managed by Marc Madiot, a two-time Paris-Roubaix winner. Committing to his profession, Rollin has settled in Girona, Spain. Unlike the majority of foreign cyclists, he doesn’t migrate back to North America in the offseason. He’s realized that to do his job well, he needs to stay in one place through the winter and train consistently. Few riders are willing to commit to a solitary life overseas in the pursuit of their goals. There are even European riders who struggle when they are away from their homes and families for more than a week. A lot of Canadians have spent seasons abroad starting at a young racing age, because if it doesn’t break them, it might makes them better cyclists.
Physical talent is rarely what determines if a good Canadian amateur can make a career as a professional bike racer. Tenacity and work ethic will determine success. Canada doesn’t have the same nurturing cycling environment like Australia, Great Britain or most of Europe. Until the Symmetrics and SpiderTech teams were created, Canadians didn’t have a team that consistently travelled and raced in Europe, so riders needed to find their own ways to gain racing experience. To take our cycling careers to the next level, we needed to race in Europe with amateur clubs or find positions on American pro teams where, with strong performances, a bigger team might notice us.
After success in the junior and under-23 categories, the Canadian national team coach, Jacques Landry, suggested Rollin race in France with the elite-amateur club, UVCA Troyes. The directeur sportif of the club was Guy Gallopin, a retired pro. Gallopin quickly taught Rollin the fundamentals of riding, adjusted his position, and helped him smooth out his pedalstroke. He also learned to live like an athlete. The year spent in UVCA Troyes moulded him into the rider he is today.
The transition from being an aspiring young cyclist at home in Canada to living overseas with a small European club is hard. It often means living in a partly unfurnished apartment in an isolated town or suburb, and there aren’t many people around to help during tough moments, like after a crash or when you are sick. In 2004, Rollin signed with a bigger team from Normandy, perhaps the grimmest area of France in the early spring when it’s windy, raining and cold. 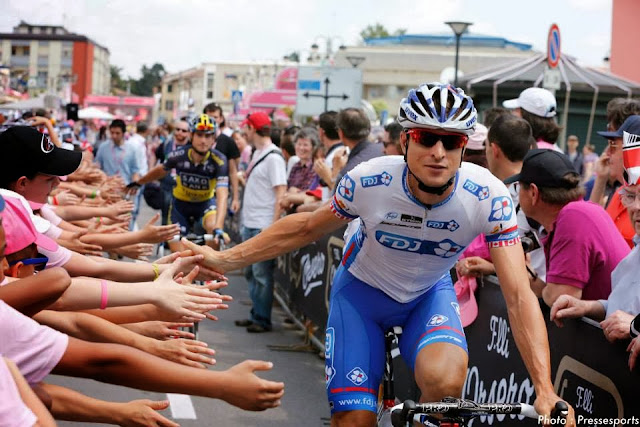 The situation seemed ideal for him, at first. A under-23 Normand team gave him a stepping stone for winning top amateur races and impressing pro team directeurs, but he was miserable. The riders on the team were all vying for spots on pro teams and were jealous of each other’s success. Instead of working together like teammates, they tried to stifle each other’s performances. The toxic atmosphere was a long way from the fun he first experienced racing in Quebec as a kid. He felt alone, depressed and his dreams about being a professional cyclist started to fade. He returned to Quebec, quit cycling and studied to become a chef.
“That year I just rode my bike for fun,” says Rollin. “I look back on those years as the turning point.” Studying, he rediscovered the balance between life and racing that he lost during his years in France. When some local riders decided to flee the Quebec cold for the sun in the southern United States, a friend asked him to come along as a guide.
In South Carolina, he rode 100 km every day for a month. “I was just riding for the pleasure of riding,” says Rollin. “I lost that in France, where I was only riding my bike for the next race, then resting.” That trip made him want to race again. He joined a club in Quebec and started winning some of the local events. That autumn his phone rang. It was Cyril Guimard, a French directeur sportif who led a generation of champions to victories such as Greg LeMond, Bernard Hinault and Laurent Fignon. He noticed Rollin’s results and offered him a position with his amateur club in Roubaix.
Having regained his appreciation for cycling, it was an opportunity Rollin couldn’t refuse. The team placed him in an apartment next to the Roubaix velodrome. It was a place he envisioned himself riding into as the winner of one of cycling’s greatest events, Paris-Roubaix. He learned to ride the cobbles, a skill that requires power and focus. That season, he performed well but didn’t know if it would be enough to get him a contract with a pro team.
Rollin was offered a place on an American team, Kodak Gallery-Sierra Nevada. It wasn’t in Europe, but it was a good program. He was a paid professional, progressed quickly on the American circuit, which had flatter races that suited his powerful build. In two seasons he got the offer he was waiting for, a chance to race in Europe with one of the sport’s strongest squads, Cervélo Test Team. 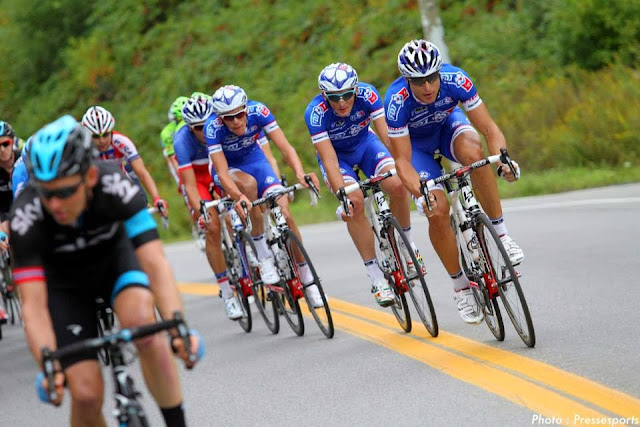 In 2010, his second year with Cervélo, we entered the Roubaix velodrome together a few minutes behind the winner. He was one step closer to achieving his dream of one day winning the famed French race.
There are roughly 60 professional riders who live in Girona and Rollin is one of the most balanced and carefree. Conversations with him are always diverse and interesting. The tough experiences of our youth make us appreciate our lives as cyclists, and the joy of competition and sport. That was the emotion he felt as a kid riding in Boucherville, Que.
Even on tough days, he doesn’t let negativity creep in. He pushes on while others fade. That’s the rare attribute needed to win Paris-Roubaix. Veteran racer Jeremy Hunt says, “Dom’s got all the qualities to win a Classic. With a little more guidance and experience he’ll get there.”