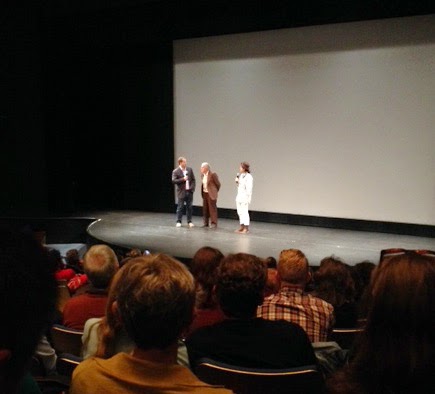 I'm still reeling after the Marinoni documentary at the Vancouver Film Festival on Saturday afternoon.

Carolle and I decided to go early, and thankfully we did. I was so surprise of the huge response. In fact, the line up stretched around the corner and down to the end of the block. I joked that fortunately it wasn't the usual rainy October day and as soon as I said that I looked up and saw a VIP...

I'm convinced most people had no idea who was the white haired gentleman but I did recognize Giuseppe Marinoni being ushered by director Tony Girardin making his way down the line. The man of legendary stature in the cycling world passed by me and I'm not one to leap out and get in his face for an autograph or handshake, I tried to hold my excitement out of respect. After he passed beside us I'm sure Carolle saw me turn giddy. It was my close brush with cycling greatness. Before the film started, there was a brief introduction and two questions were directed to the audience... "Who's a cyclist? & Who owns a Marinoni?" The response; unsurprisingly a huge show of cyclists' hands and notably a large number of Marinoni owners. Impressive.

The opening scene was the perfect tonic to get my anticipation into high gear. Girardin is talking to a cantankerous Marinoni busily brazing a frame and complaining the filming was too stressful. I like Marinoni already. According to Girardin, the movie was set around his 2012 lead up towards his world hour record attempt for his age group (75-79). Cleverly, Girardin included as much of his life as possible. One of my enjoyable scenes is Marinoni, as joyful as can be, hunting for wild mushrooms.

I only knew of Marinoni as the frame builder and little else about the man before this wonderful documentary. My discovery was in 1987, spending my hard earned savings on a custom steel frame from Velocity Cycles in Edmonton. You see, Marinoni was an accomplished racer in Italy and raced in Canada. He eventually married and settled in Québec in the 1960s. After his cycling career, he returned back to Italy to learn frame building from one of the best, legendary frame builder Mario Rossin (head frame builder for Colnago) who went on to start his own brand, and Ciocc. Marinoni opened his own shop in Montréal in 1974. And by the late eighties, he already had a loyal and growing following amongst amateurs and pro cyclists including Steve Bauer, Connie Carpenter and... Jocelyn Lovell. 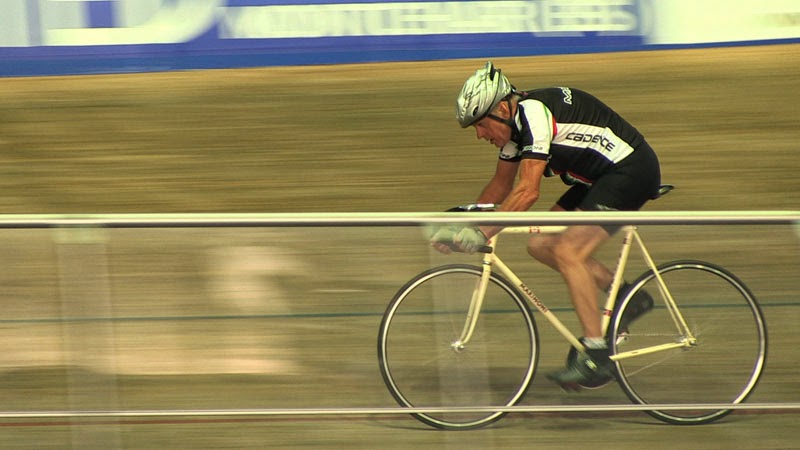 Marinoni smashing the hour record on the same track bike he made for Jocelyn Lovell.

Jocelyn Lovell won numerous national and international track titles. In 1974, five national titles in the same year. In the film, the defiant Lovell dares any rider to do the same. Tragedy struck on August 4, 1983, Lovell was hit by a truck, while on a training ride. His injuries made him a quadriplegic. The tie in is that Marinoni built his 1978 Commonwealth Games record track bike, the same one he decided to use in his record attempt. As Marinoni journeys back to Italy to successfully achieve the record, wonderful moments are many as he reconnects with his birth country.  It's outstanding to watch him beat the hour record. For me, the heartful moment is the visit by Marinoni to Mississauga to visit Jocelyn Lovell. Up till then, they have never seen each other since Lovell's accident.

My passion and love for my faithful Marinoni bicycle has been unwavering since the beginning. After watching this film I've embraced a new level of appreciation for my Marinoni. Thanks to Tony Girardin for crafting a superb and intimate portrait on the life of Giuseppe Marinoni: the master frame builder and world hour record holder. An inspiration to us all as the man that passionately lives his life on two wheels.

1. Simone was in the audience, quiet and omnipresent support to Giuseppe. In my opinion, she is the quiet pillar of strength for Cycles Marinoni.

2. Now, in it's 40th year, and after over 40,000 frames built, Marinoni continues to create sought after distinctive steel frames. He currently builds the limited 40th edition steel lugged frames, sadly the last run he will make.

3. The film was first release at Toronto's Hot Docs Festival. Jocelyn Lovell was at the premiere. And, the film was so popular it was invited to the Vancouver Film Festival. This November it screens in Montréal.

4. Distribution strategy is set for this Fall. Hopefully, a dvd is upcoming for everyone to see it.

5. Marinoni turned 77 on September 30 and celebrates his birthday by riding twice his age. He rode 154 kms.

6. He says he is still surprised by the reaction to the film.

8. Giuseppe and Simone had to fly back to Montréal for work Monday morning.


"What makes me proud is when someone comes here with one of our bicycles - old or new - and says they are happy with it." 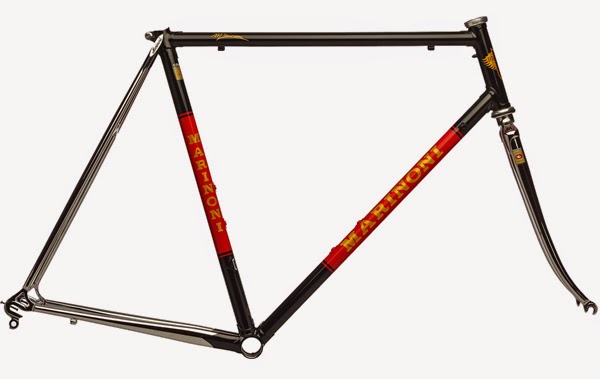 Lorenzo and Erica said…
Nice review! Hope they offer a DVD so more can enjoy the film. Anyone brazing bikes with lugs is a hero to Larry. There's something special about a bike made by a guy whose hand you can shake.
October 25, 2014 at 1:58 AM

Richard said…
They are working on distribution and hopefully a DVD is upcoming. Thanks.
October 25, 2014 at 2:06 PM