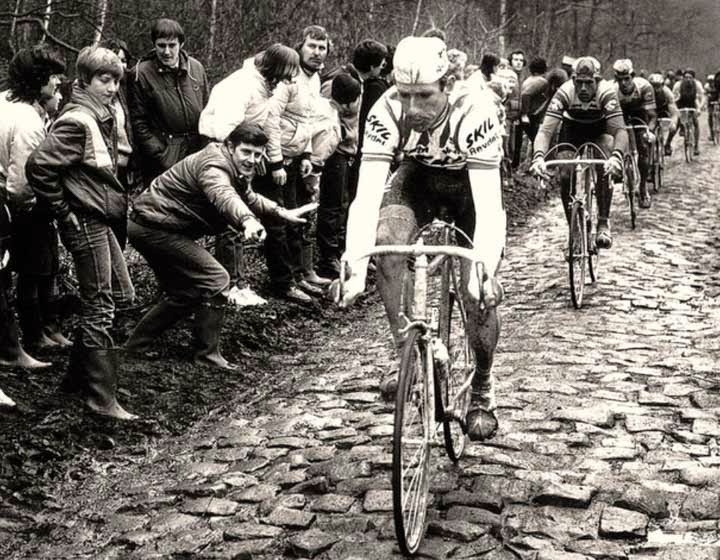 Sean Kelly's 1984 season was his best - achieving 33 victories. I would like to think of him as one of the toughest classic riders of all time. For me, in 1984 I was a newbie to the world of pro cycling. It was the first time I watched it on TV and I was immediately captivated of the two-wheeled prizefighters battling over the gigantic cobblestones (image above). Kelly was the man of the hour, in this case 7hours 31mins (his winning time), and he seem to float over the pave with ease.

"I have never felt stronger that I did during the 1984 Paris-Roubaix. I remember being in a group of about thirty riders and waiting for a moment to attack. Jean de Gribaldy kept telling me to wait, not to make my effort too early. When I eventually attacked I got clear and was on my own for about two kilometers. Then I could see that the Belgium Rudy Rogiers had left the group in pursuit. I decided to wait for him as it was better to have him alongside than to run the risk of him bringing the other riders up. It was a cast of getting him out of harm's way. And, as he couldn't sprint that well, he was not going to be a big problem at the finish."

That day, I became a Sean Kelly fan. And now, looking back on it, I sometimes can't believe it was thirty years ago. What an amazing race... by the remarkable King Kelly!