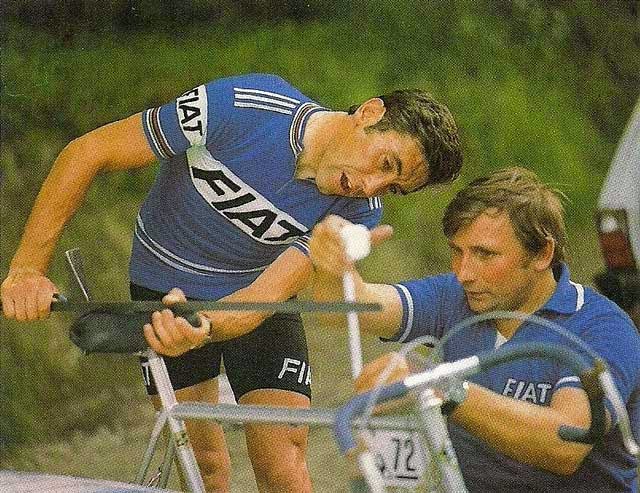 
I'm blissfully reading the fascinating book, 'Half Man, Half Bike: The Life of Eddy Merckx,' by William Fotheringham. And, I'm reminded of his special relationship with his bike(s).

Obsession... could be best described of Eddy Merckx. A bundle of nervous energy that would give him a few sleepless nights only to find relief in his work room to adjust and re-adjust his many bikes. When he did sleep he would often dream of racing.

Energy... "His store of energy was incredibly large. If he has nothing to do, he goes crazy." - former teammate, Patrick Secru.


"He never could sit still. He was always busy doing something. And it was nearly always connected to some way with a bike. It was pure obsession. He always had around 500 tubular tires and 100 wheels, and he kept around 35 bikes in his workshop, 15 of which were always ready to ride. I remember us once setting off for the Giro with 17 different bikes of his. It was incredible how he occupied himself with them. He tried out everything and more and was never completely satisfied with a particular solution." - confidant, Guillaume Michiels.


And Merckx, never quick to deny, said, "It's true that I kept hundreds of tires at home in the cellar for months on end. That's because they kept on getting more and more expensive. I was asked in 1971 if it was true that I had taken a bike apart to find out how many parts it comprised. I answered that it was. I must have been mad. I did find out, though, that a bike is made up of around 1,125 separate parts."

"It is a cliché, but Eddy was and is always obsessed with bikes. I've known him get (sic) out of bed in the middle of the night on more than one occasion and go into the garage to change something on his handlebar or his saddle or gears or something like that." - Claudine Merckx.


And he also carried his own allen key to make micro adjustments to the height of his saddle. Love for his bike... in spades.