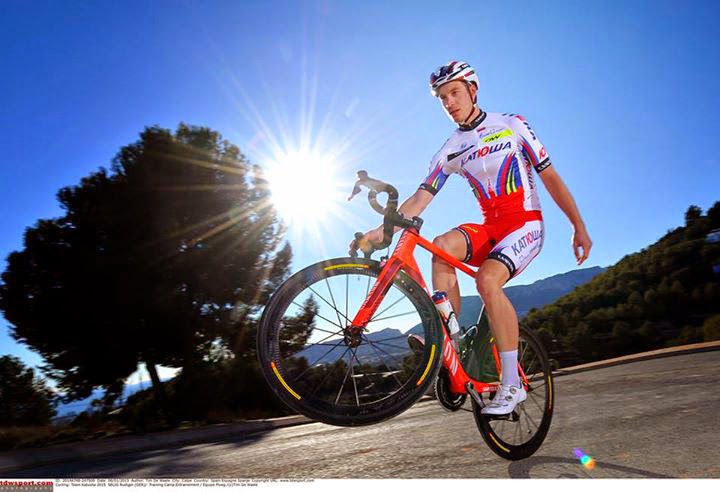 Rudiger Selig going for a spin.
via katushateam


The cycling season is in full swing and also new presentations of team kits,. Here's three that have kept it classic and new.

KATUSHA: (above) New for 2015 is predominately white/red kit. 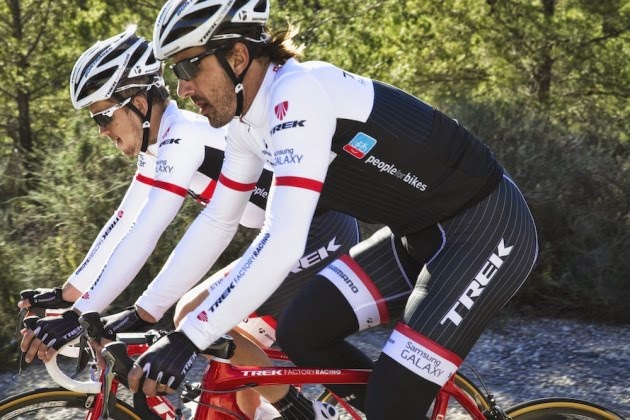 
TREK FACTORY RACING: The jersey has more white with red trim with the pinstripes make for a classy looking kit. 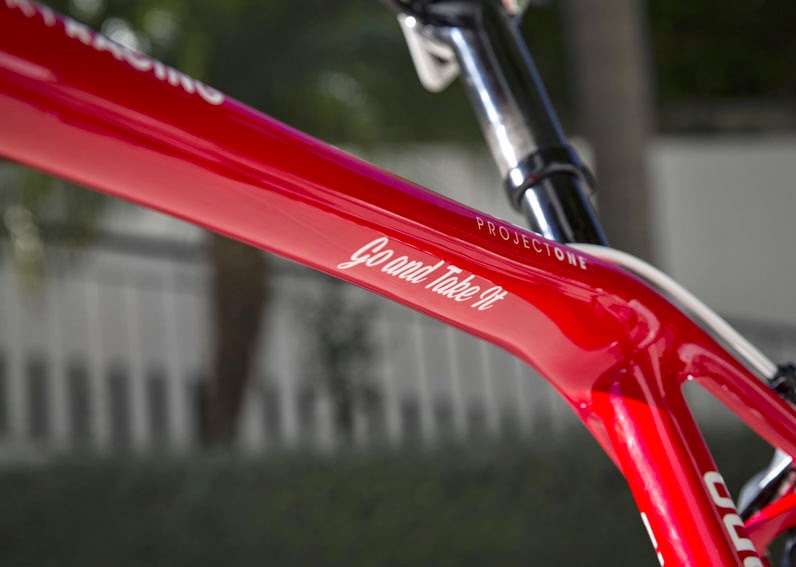 Words to live by: Go and Take it -
on the Trek Emonda. 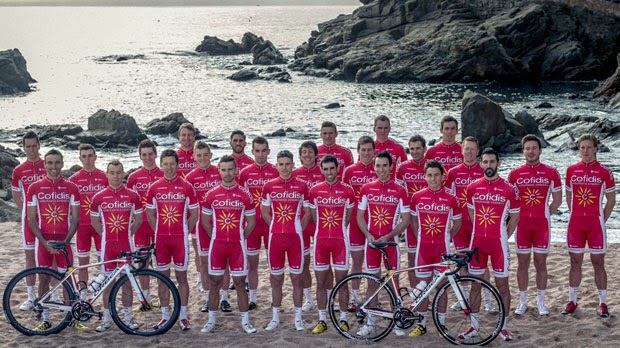 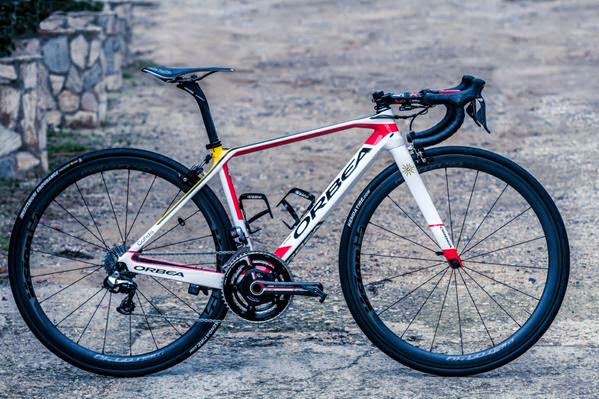 Cofidis rides into 2015 with a new team and kit. Gone (thankfully) is the white diagonal of last season, add a red/white color scheme - tastefully done. The team is created around with newly acquired sprinting ace Nacer Bouhanni in mind. Notably, is the return of Quebec's Dominique Rollin who was without contract after 2013. Forced to abruptly retire, such is the cruel fate of professional cycling. But, no more, Bouhanni insisted to have him as part of his lead out train fondly remembering their successful collaboration at FDJ. Rollin is an excellent addition as he will have unfinished business in his favorite classic races i.e. Hell of the North. I'm glad he's back. 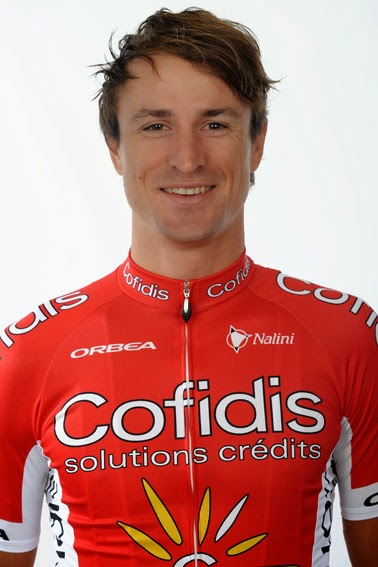 All Smiles for Quebec's Rollin reuniting w/
Nacer Bouhanni and Geoffrey Soupe for 2015. 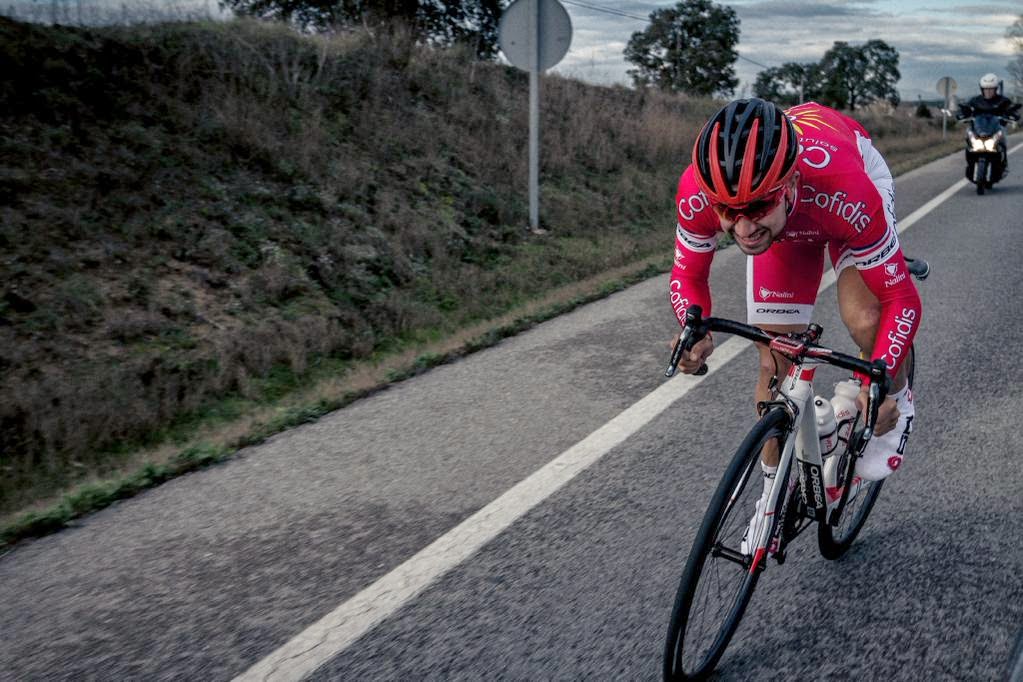 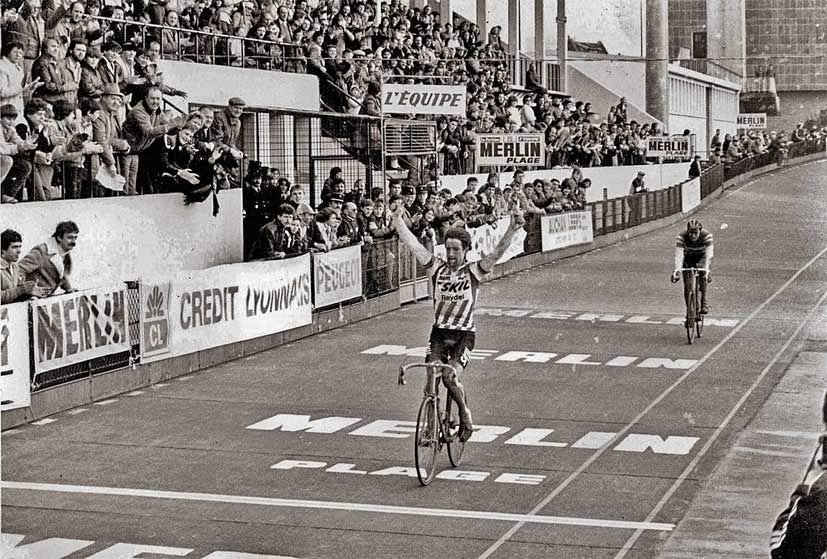 Paris-Roubaix is my favorite Classic. The longer this race goes the attrition rate and drama rises. Sean Kelly dominated in the 1980s, his classic period. He won 33 victories including the points classification and finished 4th GC in the Tour de France. The 1984 Paris-Roubaix was his race, masterly won and afterwards, L'Equipe published a picture of Kelly muddy on the cobbles and the heading Insatiable Kelly!  Here's the interesting except from Hunger: The Autobiography by Sean Kelly...

There’s a myth that grew as my career went on. Some people said that if it was raining on the morning of a race, I would draw back the curtains and rub my hands together in glee. The perception was that I relished the bad weather, enjoyed it even, but that was certainly not the case. No one likes to be cold and wet; it was just that my body coped with the conditions better than a lot of others. I was just as miserable as everyone else, it’s just that I was able to keep pushing hard.
The week before the 1984 Paris-Roubaix, I got totally worked over by a bunch of Belgians and my team manager Jean de Gribaldy was not happy. He wasn’t in the mood for me to make the same mistake twice.
Paris-Roubaix is a horrible race to ride but the most beautiful one to win. I was in great form and as the rain fell the day before the race I knew my chances were improving. On race day it was grey and uninviting. Although the rain had stopped the cobbles would be wet and muddy. I knew I would be in for a hard day but I also knew a lot of riders wouldn’t fancy it in these conditions.
Even on a dry day, only around 25 riders have any hope of winning Paris-Roubaix. In the wet, you can reduce that number to a dozen. Of them, a handful are bound to crash or puncture at a bad moment.
The distance – 260 kilometres (162 miles) – and the fact that 55 (34 miles) of those kilometres are on terrible, dangerous, painful cobbled roads, known as pavé, is daunting enough. But as we rolled away from the start, heading towards the First World War battlefields, I knew I had to be careful and patient for at least the first half of the race.
As the race reached its critical phase, there were two leaders out in front, both from the same La Redoute team. Gregor Braun and Alain Bondue had broken away together and were working well together, although they were sure to tire.
Back in the chasing group, I had itchy feet. With 80 kilometres (50 miles) to go, I dropped back to my team car to have a chat with De Gribaldy, who was an authoritarian team manager. I told him I was going to attack. He told me to wait, fearing it was still far too early.
I talked to him again and still he refused to let me go. I was like a horse desperate to get free of the rope and run away.
With 45 kilometres (28 miles) to go, I could wait no longer. We came to the section of pavé at Orchies, and I accelerated. I looked back and saw that a Belgian rider called Rudy Rogiers was trying to get across to me. I decided to wait on the basis that two riders would be better than one.
Together, we chased down Braun and Bondue. Each jarring section of cobbles sapped the energy and the smooth sections of road between the pavé numbed the mind. Of all the big classics, Paris-Roubaix is the flattest, but don’t imagine it’s easy. There’s almost no opportunity to freewheel and gain any respite. It’s pedal, pedal, pedal, as hard as you can.
As soon as we caught Braun and Bondue, I went to the front to drive the pace. Braun was dropped immediately. Bondue hung on a bit longer than I expected but then he slipped on the cobbles at Camphin-en-Pévèle and fell. The cobbles there are really vicious, but Bondue’s crash was probably as much down to fatigue.
That left just me and Rogiers, not a rider I should have feared in the sprint. As we approached the finish in the velodrome at Roubaix, De Gribaldy came alongside me in the team car. His message was simple. "Whatever you do, don’t mess this up."
I had never been so nervous. Victory was within reach but Paris-Roubaix is a cruel race. A puncture now could rob me. I was worried the mud might jam my gears.
In the velodrome, I manoeuvred Rogiers to the front, where I wanted him. In the end, the sprint looked quite easy but it was anything but. I was tired and relieved.
The next day, with my cobblestone trophy on the kitchen table and my bike still caked in mud in the garage, my whole body ached. My hands buzzed from the constant vibrating on the cobbles. It was like pins and needles. My undercarriage was raw. When I went for a pee the burning sensation made me wince. Paris-Roubaix is the hardest single-day test a rider can face.
Having won the Hell of the North, the press gave me a nickname of my own: King Kelly. As nicknames go it was quite a nice one to have.

Watch Sean Kelly grind it out to win a classic muddy PR...